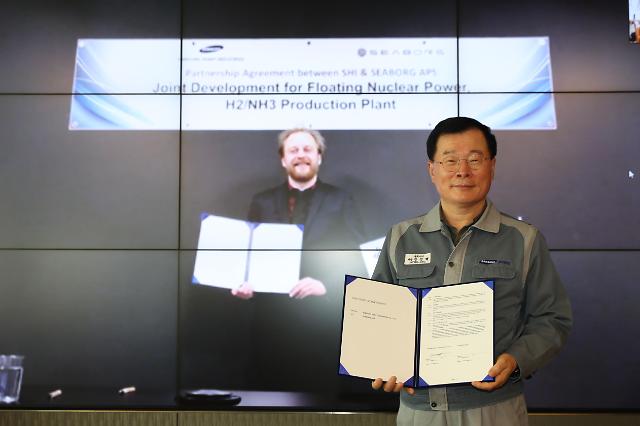 Solid fuel rods used in conventional reactors need constant cooling with water under high pressure. The low boiling point of water creates a potential point of failure. Instead of graphite as a moderator, a compact molten salt reactor (CMSR) uses molten sodium hydroxide contained in pipes, enabling a more compact design. It also allows the liquid moderator to be rapidly removed from the core.

"SHI is focusing its capabilities on developing products that utilize carbon-neutral technologies from renewable energy such as hydrogen and wind power to nuclear power," SHI CEO Jung Jin-taek said in a statement on April 7. Seaborg CEO Troels Schönfeldt expressed hope that the partnership with SHI would accelerate the commercialization of offshore nuclear power plants, citing CMSR as a new solution that can effectively respond to climate change.

SHI partnered with the state-run Korea Atomic Energy Research Institute (KAERI) in June 2021 for the development of a small carbon-free fission reactor based on molten salt that would be used for ships and floating nuclear power plants. They regard a ship based on a molten salt reactor (MSR) that could produce electricity and hydrogen at the same time as a game-changer in international logistics.

MSRs are a class of small modular reactors (SMRs) that have been studied to address the limitations of traditional light-water reactors. MSRs can reduce expensive containment structures and eliminate hydrogen as a source of explosion risk and do not produce dangerous and radioactive fission gases that are under pressure.