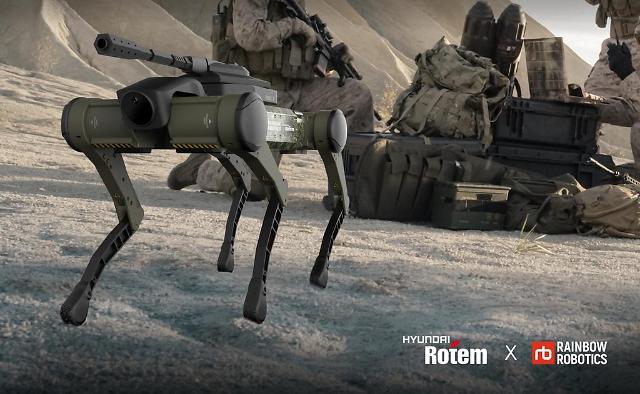 There is a growing demand for robots that can be operated on battlefields, disaster areas, and urban areas. The defense ministry has revealed a military scheme to develop multi-legged defense robots for surveillance, reconnaissance and counter-terrorism missions.

Rainbow Robotics, the exporter of bipedal robots, has been selected for a military project to develop quadrupedal robots for surveillance and search. "Our robot is made with 100 percent of our own technology, know-how, and parts. We will do our best for the successful development of a defense robot with Hyundai Rotem, which has the ability to develop future weapons systems," Rainbow Robotics CEO Lee Jung-ho said in a statement on April 7.

Four-legged robots or leg-wheel-type robots are being developed by global robot makers and tech companies for their versatility. Unlike their wheeled or tracked brothers, legged robots can move through extreme terrain including rocky boulders and narrow mountain trails. In cases of emergency, they can move faster in severe terrain conditions to carry heavy cargo or patients.

In October 2021, Hyundai Rotem's leg-wheel military robot called "DOSS (daring operations in service and search)" was showcased at an international aerospace and defense exhibition in South Korea. The ultimate mobility vehicle (UMV) uses wheels in flat terrain, but intelligent robot legs use walking ability in rough terrain for various missions such as surveillance and the transportation of injured people and goods. Remote and autonomous driving is possible.

Based on Spot, a four-legged robot developed by Boston Dynamics, the Hyundai auto group has revealed a leg-wheel robot called TIGER (transforming intelligent ground excursion robot) that is about 0.8 meters (2.6 feet) was designed to navigate through challenging terrain using a sophisticated leg and wheel locomotion system and various sensors.