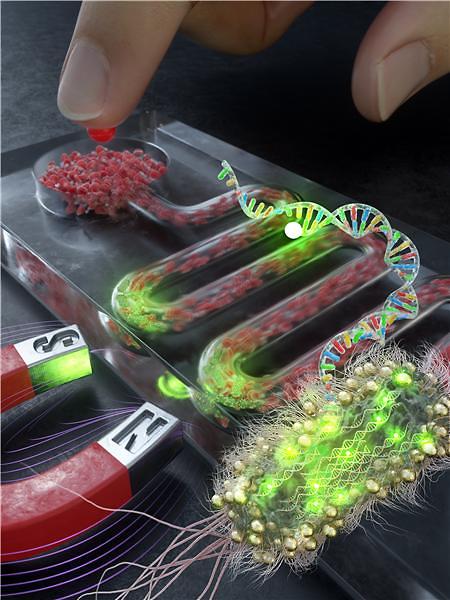 SEOUL -- South Korean researchers have developed an ultra-quick detection technique capable of analyzing blood for the presence of viable bacteria using a microfluidic chip. Bacteria sometimes cause infection within the bloodstream, a microbiological disease known as bacteremia or more commonly known as blood poisoning. The newly-developed method takes about three hours to get results while the conventional technique requires two to three days.

Blood poisoning caused by bacteria in the bloodstream is a serious infection that involves symptoms such as acute fever, chills, irregular heartbeat, rapid breathing, and extreme fatigue. The disease can become deadly if a patient is not treated soon. Blood poisoning is one of the top 10 most common causes of death in South Korea, accounting for about 24 percent of death causes between January 2020 and April 2021.

It is important for doctors to find out the kinds of bacteria present in the bloodstream in order to set up an optimized treatment plan. Conventional blood poisoning detection technique requires days to come up with test results but the patient can become very ill or die while waiting for results.

The Ulsan National Institute of Science and Technology (UNIST) said that a chip developed by researchers from UNIST and Seoul National University Bundang Hospital incorporates microfluidics and fluorescence in situ hybridization (FISH) technique. The finger-sized chip can separate and concentrate bacteria from a blood sample to detect microorganisms.

The FISH technique is used for detecting and locating a specific DNA sequence on a chromosome. Magnetized microfluidic nanoparticles allow the chip to selectively separate and concentrate bacteria from the sample. The sample's fluorescence can be intensified to find out the severity of infection.

"We have developed a quick and convenient technique that can overcome disadvantages of blood culture method or gene-based tests that required complicated processes and a long time," UNIST said, adding that the new technique greatly reduced the time taken and steps of test processes for blood sample testing.