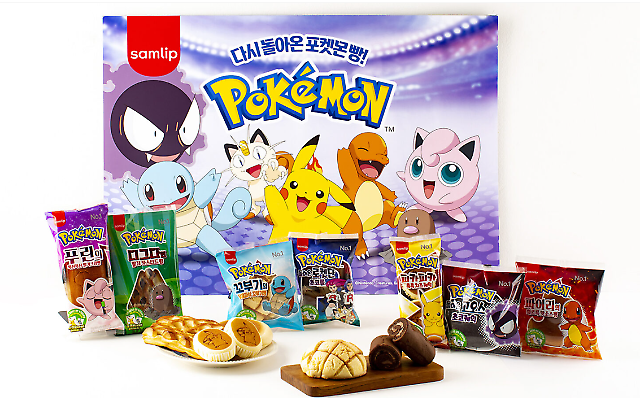 SEOUL -- "I don't know what the craze is all about. People are just mad," Lee Eun-hye, a convenience store owner in her mid-20s living in eastern Seoul, said, sighing heavily with her face full of annoyance. She complained about the onslaught that takes place at her store every day.

Lee said that her employees could not work properly because of people frantically asking for the famous Pokemon bread all the time. "I am sick and tired of people asking for Pokemon bread. Sometimes they yell at me for no reason. I decided not to sell those snacks for the sake of my mental health. Some accuse me of stashing the bread for me or for my friends."

Scenes similar to Lee's experience can be witnessed at tens of thousands of other convenient stores because of the "Pokemon bread." South Korean convenience stores and other supermarkets suddenly became an arena of up-for-grabs for collectors in February 2022 when SPC Samlip, a major domestic confectionary maker, re-released Pokemon-licensed bread snacks containing characterized Pokemon stickers. The original version of the snack was released in 1998.

The re-release of the popular snack attracted all Pokemon lovers, especially people in their 30s and 40s who had collected the same stickers when they were young. It is common to see early birds line up at convenience stores before dawn to pick up the famous bread as soon as they arrive at stores in a truck from a confectionery factory.

"I collect Pokemon stickers mainly because of their nostalgic value. They remind me of my younger days," Park Yoon-seo, a 41-year-old businessman, said, adding that many middle-aged people have joined the craze because of similar reasons. He has collected some 70 kinds of stickers and his trophies are steadily increasing. His refrigerator is filled with Pokemon bread.

Park often goes hunting for Pokemon stickers at convenience stores on early weekend mornings but he sometimes seeks the precious character items at online secondhand marketplaces. Sometimes rare stickers are sold for expensive prices of more than 100,000 won ($82). "I trade the duplicate ones with those I don't have. Some of my stickers are very rare but I will keep them for myself."

The Pokemon bread ride the consumer trend that focuses on retro products. Among major consumer trends in South Korea, retro is one of the most popular shopping trends among all generations. Young consumers favor listening to music using LPs, cassette tape players and CD players because of their classic designs and unique sounds while older generations seek toys and books they had played with when they were children.

Retro products, also known as "newtro" products, are items that pay homage to products designed in the 80s and the 90s. According to a 2020 survey of 2,000 consumers, conducted by market research firm Trend Monitor, 63.9 percent sought nostalgic items because they miss the good old times. A retro wave swept across the world in August 2020 when K-pop band BTS released "Dynamite," a dance-pop song based on the 70s' disco beats. South Korean apparel maker Fila garnered popularity among young generations for its re-interpretation of its best-selling products including tracksuits and running shoes bearing the designs from the 90s.

RM, the leader of BTS, was one of the popular figures who fueled the "Pokemon bread fever." The 27-year-old uploaded a photograph of Pokemon stickers through an Instagram post in March, sparking fans' curiosity. The singer said in a live online chat session with a fan that RM and his family members visited 10 convenience stores to get the famous bread. Collecting Pokemon stickers soon became a popular hobby among ARMY, the international fan club of BTS.

Meanwhile, SPC Samlip is under massive pressure to produce more Pokemon bread but the confectionary maker said that the company is doing its best but is not sure when the supply will be stabilized.

"We are operating our Pokemon bread production facility 24 hours a day to our maximum capacity but we are in a situation where we are not able to stably provide our products to everyone. We deeply apologize for our customers' inconveniences caused by such a problem," SPC Samlip said in a statement released through the company's online shopping mall in early April. The company held a special event for Pokemon bread fans so that they can purchase the snacks for a very limited time via the shopping mall but Pokemon bread packs were all sold out in a flash. "SPC Samlip is doing its best at every angle to stably supply Pokemon bread."

The Pokemon sticker craze not only engulfed people in their 40s, young children also love the characterized items. "I saw the stickers through YouTube videos. I had to take care of house chores ten times to have my father buy them for me," Kim Kang-min, a six-year-old kindergarten student said. "I had to visit more than five convenient stores to get one bread," Kim Mo-hoon, Kang-min's father, said. Visiting convenience stores before he goes to work early in the morning has become an everyday routine for the 42-year-old businessman.

The search for hard-to-get bread snacks continues. Kim Na-hyun, a 26-year-old businesswoman, checks convenience stores that come into her sight every now and then but the result of bread hunting is not so good. "I tried to visit a megastore because I heard that more than 100 packs of Pokemon bread come in every morning and there were about 200 people waiting before me."

Kim's ultimate goal in her Pokemon bread-seeking quest is to get the sticker bearing the picture of Gastly, a monster character from the Pokemon animation series. "I think I can visit stores up to 20 more times to get the Gastly sticker."