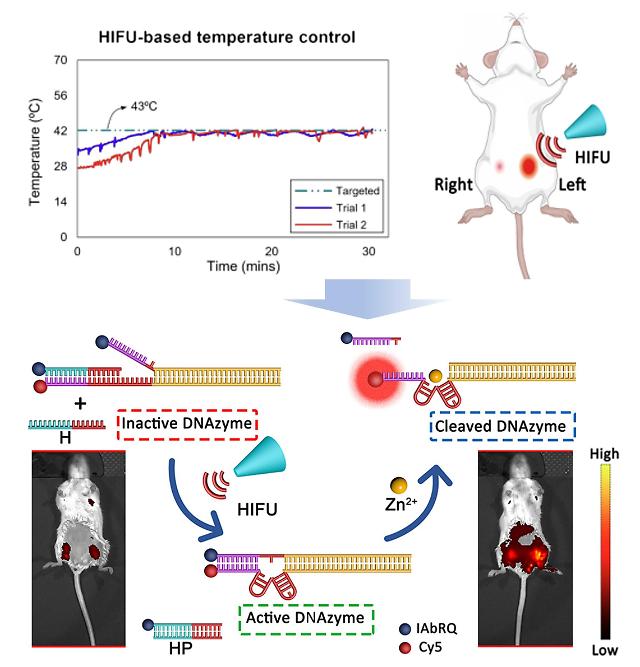 SEOUL -- A joint team of researchers has developed a diagnostics technique that uses high-intensity focused ultrasound to detect metal ions. The technique can play a vital role in the process of understanding the metal ions in both healthy and disease states.

Metal ions are basic and fundamental elements required for the maintenance of life of plants, animals and humans. The essential metal ions for humans include sodium, potassium, calcium and magnesium. Other trace metals such as iron, manganese, cobalt, copper, zinc and molybdenum are also important. It is vital to find what kind of metal ions are present inside an animal's body because they can be beneficial or toxic depending on their identity.

DNAzymes, also known as deoxyribozymes, are DNA molecules capable of catalyzing a specific reaction. Metal-dependent DNAzymes are used to create a biosensor for metal ions. When the sensor detects metal ions and becomes active, it turns on a fluorescent signal visible to the human eyes. Some DNAzyme-based sensors use optical laser for activation but because the laser was unable to penetrate the skin or layers of muscle tissues, the utilization of such optical laser-based DNA sensors was limited.

Researchers from the Ulsan National Institute of Science and Technology (UNIST), the University of Texas and the University of Illinois used high-intensity focused ultrasound to activate DNAzyme biosensors and detect zinc ions from a live mouse. The ultrasound was used to maintain the temperature of the mouse's side at 43 degrees Celsius (109.4 degrees Fahrenheit) for 30 minutes to activate the DNAzyme biosensor injected into the side of the body. The part of the body shot with ultrasound showed a stronger fluorescent reaction.

"This research has shown that the ultrasonic technique can be used for the detection of specific elements in a body and the activation of nanoparticles for drug delivery as well as conventional photodynamic treatments and ultrasonic imaging," UNIST researcher Kim Gun said in a statement on April 13.