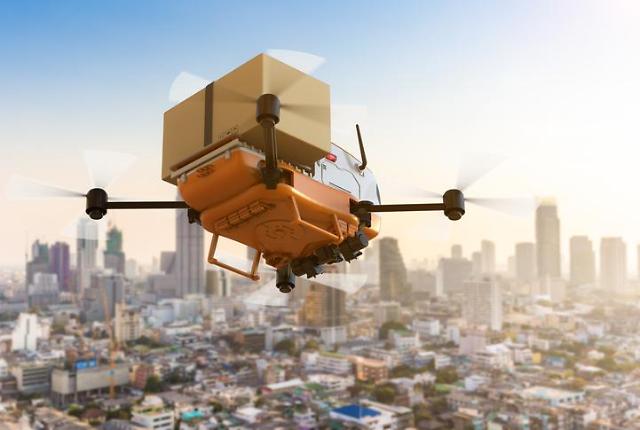 SEOUL -- South Korea will demonstrate a drone traffic control tower system to accelerate the use of drones in various fields including the maintenance of facilities and the emergency delivery of blood packs in urban areas. The demonstration of the "K-Drone" system is aimed at testing the efficacy of operations with high potential for commercialization.

Drones are used to inspect the structural integrity of facilities such as chimneys and the substructure of bridges, or for search and rescue missions in the mountains or in the sea. Some drones deliver medicines and important parcels to remote areas. Urban areas are basically a no-fly zone due to safety and security issues, but a few types of urban drone services are available thanks to the government's temporary regulation exemption program.

The Ministry of Land, Infrastructure and Transport has selected seven operators including KT, Korea Airports Corporation, and the state-run Land and Geospatial Informatrix Corporation (LX) to participate in the demonstration of the K-Drone System. They will seek safe and efficient methods for the adoption of new services.

The demonstrations will include the development of new flying routes for unmanned vehicles and drones, an air traffic control system, a structural management system for important facilities including dams and waterways, and an aerial emergency delivery service for blood packs through non-visible flight.

Currently, the law limits the area of drone flights to a radius of a few kilometers from operators. Through the demonstration, drones will carry out non-visible flights over a single trip distance of about eight kilometers (4.9 miles) to deliver blood packs.

The transport ministry predicted that the demonstration will accelerate the commercialization of the drone control tower system that would safely control air traffic. "For the long-distance operation of multiple drones, a drone traffic control tower is essential," Na Jin-hang, a ministry official in charge of drone traffic, said in a statement.