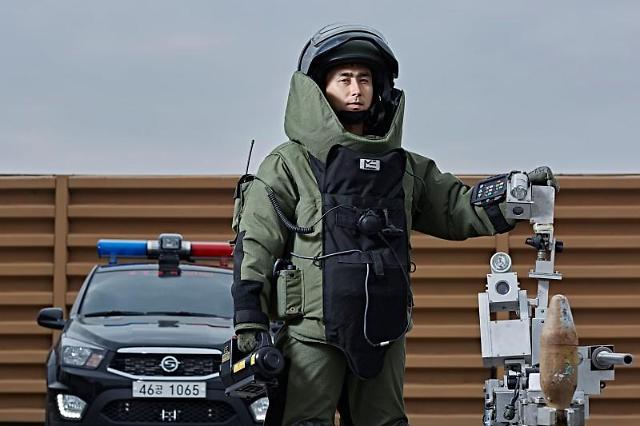 [Courtesy of the Ministry of Defense]

SEOUL -- South Korea will launch a project to localize laser equipment that can safely dispose of or defuse bombs, unexploded munitions, and improvised explosive devices from a few hundred meters away.

Explosives are removed by specially trained personnel wearing a bomb suit, also known as explosive ordnance disposal (EOD) suit or a blast suit. The heavy armor-plated suit that weighs about 40 kilograms (88 pounds) dampens the impact caused by explosion. However, bomb disposal personnel can be injured or killed if the blast and shrapnel of explosives are powerful enough to rip through their EOD suit.

In many countries, bomb disposal units operate special bomb disposal robots or vehicles that shoot powerful jet bursts of water or laser to disarm or defuse bombs. Sometimes explosives are carried to an empty, safe location to be detonated. South Korea operates trained dogs, robots and bomb disposal technicians for EOD operations. It is not rare to find old unexploded bombs used during the 1950~1953 Korean War at excavation sites.

The Defense Acquisition Program Administration (DAPA) said that a localization project for bomb disposal laser equipment has been approved. The equipment will be small enough to be carried on a vehicle. "Through deflagration, the laser equipment can incapacitate explosives with minimized collateral damage," the agency said. Deflagration uses laser or other precision equipment to burn or remove only detonating charges so that shells can be carried to a safe space for detonation.

"This project will be South Korea's first localization of laser weaponry for bomb disposal. When completed, EOD units can safely disarm bombs at battlefields or in the ordinary environment while maintaining a higher rate of survival," Army Brigadier General Cho Hyun-ki said in a statement on April 14.