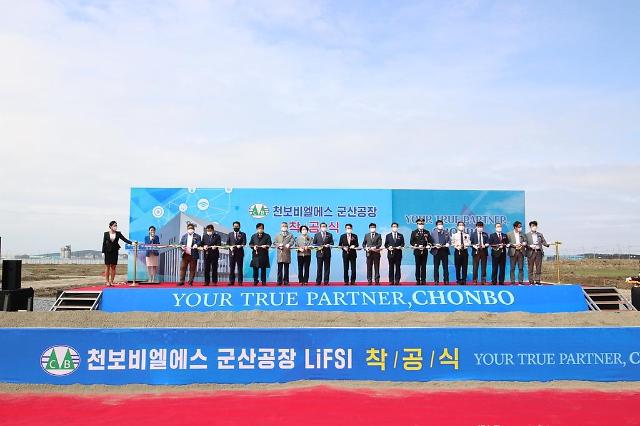 SEOUL -- Chunbo BLS, a subsidiary of South Korea's chemical company Chunbo, has broken ground for a new plant for the production of a next-generation electrolyte for lithium-ion electric vehicle batteries in an industrial zone set up on reclaimed land near the southwestern port city of Gunsan.

Chunbo thinks the new plant will help the company solidify its status as a key electrolyte producer at home and abroad. A ground-breaking ceremony took place on April 15 at the Saemangeum National Industrial Complex. Chunbo's plant is to be completed with an injection of more than 700 billion won ($570 million) by 2026 to produce some 20,000 tons of lithium bis(fluorosulfonyl)imide (LiFSI) per year.

LiFSI has been studied as conducting salt for lithium-ion batteries. It has attracted attention as a next-generation electrolyte material with excellent effects on high power, longevity, and anti-corrosion. It prevents batteries from dying at low temperatures.

Chunbo did not hide its ambition to dominate the electrolyte market with price competitiveness, saying that it would build LiFSI manufacturing facilities with an inexpensive and innovative manufacturing method. A separate plant capable of producing 10,000 tons of electrolyte additives per year will be built along to enhance Chunbo's competitiveness.

Chunbo's investment was seen as a timely response to the rapid worldwide introduction of electric vehicles that prompted battery suppliers to develop cheaper, more efficient, and more powerful products. The electrolyte is a crucial component that serves as a medium for transporting lithium ions when charging and discharging, and improves the performance and efficiency of batteries.

Chunbo will be given various tax and other incentives that the operator of the industrial zone in Saemangeum has pledged. The Saemangeum Development and Investment Agency (SDIA) said earlier that Chunbo's investment would play a major role in upgrading the industrial condition of Saemangeum.

SDIA has tried hard to lure domestic and foreign investors into a huge area of reclaimed land created by a seawall that stretches 33 kilometers (20 miles) along the coast. The seawall built in 2010 has been certified by Guinness World Records as the world's longest man-made sea barrier which created an area of about 400 square kilometers and a freshwater reservoir.

In a project sponsored by the regional government of North Jeolla Province, the construction of a testbed for the research and development of high-speed autonomous driving technologies began in Saemangeum in November 2021. Self-driving cars with level 3 autonomous drive technologies or higher levels will be developed at the test area. A 21-kilometer-long test road, as well as safety and analytic facilities, will be built by the end of 2022.