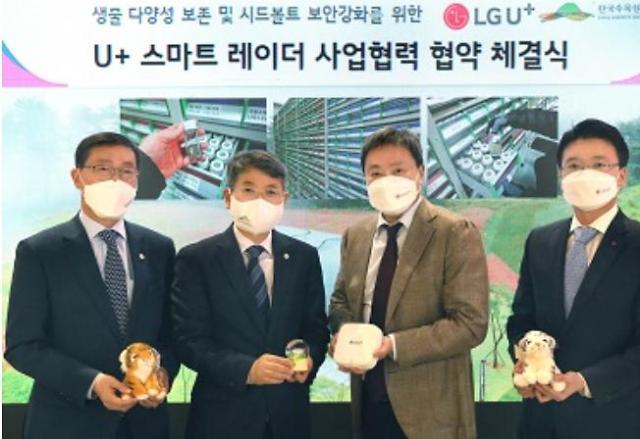 SEOUL -- In order to respond to the climate crisis and help preserve biodiversity, LG Uplus will donate an artificial-intelligence-based smart radar service to South Korea's only seed vault run by a state arboretum that opened in 2018 in a mountainous area to store seeds donated by institutions from all over the world.

The seed vault in the National Baekdudaegan Arboretum in Bonghwa, about 150 kilometers (93 miles) southeast of Seoul is an underground facility with a triple iron plate structure. It is one of two permanent plant seed preservation facilities in the world, along with one in Norway.

LG Uplus (LGU+) said its smart radar in the 77GHz frequency band will be installed at the seed vault's entrance and archives to automatically detect the movement and location of intruders. Smart radars analyze the electromagnetic waves shot and reflected from an object, identify, and detect the location and speed of an object. AI-enabled smart radar sensors are capable of tracking targets that are hundreds of meters away.

"Starting with the seed vault, which is a national security facility, we will develop services to distribute our smart radar to various public institutions," LGU+ new business group head Im Jang-hyuk said in a statement on April 20.

South Korea's seed vault with a capacity of more than two million seeds preserves a wide variety of wild plant seeds threatened by climate change with its temperature constant year-round at 20 degrees Celsius below zero. Norway's seed vault on the island of Spitsbergen in the remote Arctic Svalbard archipelago provides food crop seeds to last survivors in doomsday.

The seed vault in Norway was built on the island of eternal frozen earth permafrost and its facility is about 130 meters above sea level and has been tunneled 120 meters into the mountain.

LGU+ said it would also install a smart radar system in a toilet used by visitors to the National Baekdudaegan Arboretum. The arboretum toilet is located several kilometers away from the management center. Managers can quickly recognize safety accidents such as visitors falling down in the bathroom.