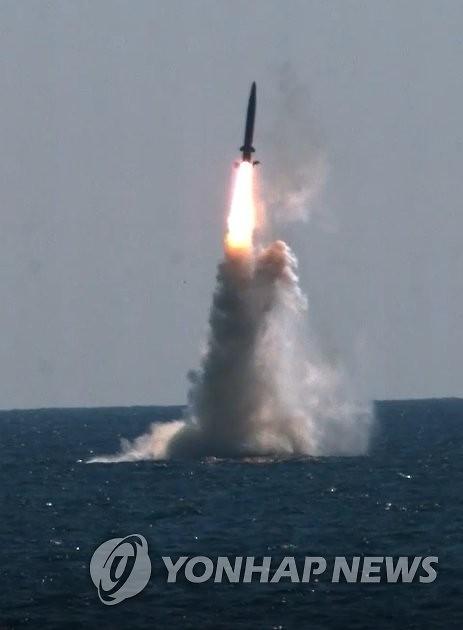 The missiles flew some 400 kilometers (248 miles) and hit preset targets, the ministry said. The test was to verify the capability of SLBMs in a real-world environment, but their maximum flight range and specifications were kept under wraps. South Korea has conducted missile tests at a limited range to avoid provoking neighboring countries,

Dosan Anchang-ho carrying six SLBM vertical launchers was used for the first SLMB test launch in September 2021. The 83.5-meter-long  submarine featuring advanced noise reduction technologies is to be deployed for combat missions in August. It can operate underwater for 20 days without surfacing by using an air-independent propulsion system.

South Korea has a three-stage military program to develop a fleet of modern conventional submarines. Through the first phase, nine 1,200-ton diesel-electric submarines have been built with technical help from Germany’s Howaldtswerke-Deutsche Werft (HDW). The second phase called for the construction of six 1,800-ton vessels. Through the third phase, nine submarines of 3,000 tons or more are to be built.

The development of ballistic missile submarines and SLBMs in South Korea is under U.S. scrutiny to control the rapid development of strategic weapons that could pose a security threat to neighboring countries in Asia. However, Washing faces increasing difficulties checking Seoul's irresistible desire to build up its independent military power.

In response to Pyongyang's persistent push for the development of nuclear weapons and long-range ballistic missiles, the South's defense ministry has maintained a task force related to a nuclear-powered ballistic missile submarine which has been of great strategic importance as it can hide from reconnaissance.

Wary of nuclear proliferation in Northeast Asia, Washington is apparently unhappy with the construction of large ballistic missile submarines with nuclear propulsion in South Korea because SLBMs are related to intercontinental ballistic missiles (ICBMs).

The deployment of highly accurate missiles on ultra-quiet submarines allows an attacker to sneak up close to the enemy coast for a decapitation strike. Nuclear propulsion frees submarines from the need to surface frequently. The large amount of power generated by a nuclear reactor allows nuclear submarines to operate at high speed for long periods.