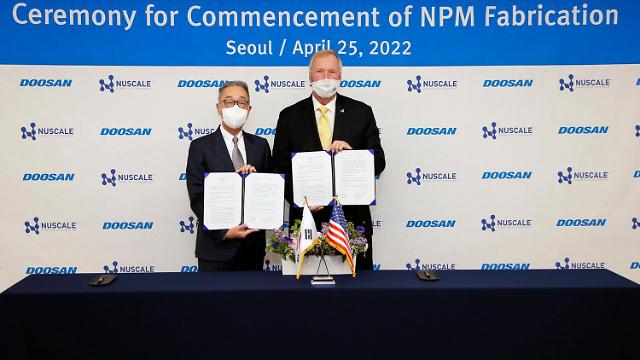 SEOUL -- Under an agreement with its American partner, Nuscale Power, Doosan Enerbility, a key player in South Korea's nuclear industry, will produce forging materials for small modular reactors as early as 2022, with expectations for full-scale equipment manufacturing by the latter half of 2023.

The materials to be produced will support NuScale's first commercial deployment of its power plant for Utah Associated Municipal Power Systems (UAMPS). Commercial operation of the first module is expected to begin in 2029. Doosan Enerbility will begin production of forging dies for NuScale's upper reactor pressure vessel.

Doosan Enerbility is now working on the development of a power module component prototype. The company would begin manufacturing large forged materials used for NuScale's small modular reactors (SMRs). "Doosan Enerbility has continuously solidified a strategic cooperative relationship with NuScale Power and has made full preparation for SMR manufacturing," Doosan Enerbility CEO Park Gee-won said in a statement on April 25.

In 2019, Doosan Enerbility and South Korean investors made a $44 million equity investment in NuScale, followed by an additional $60 million in July 2021. NuScale's SMRs are based on a safer, smaller, and scalable version of pressurized water reactor technology. With NuScale's scalable design, a power plant can house up to 12 individual power modules. It houses the reactor core, pressurizer and steam generator inside a single containment vessel.

Nuscale, based in Portland, Oregon, aims to enter the global SMR market after successfully carrying out the UAMPS project. "Today’s announcement showcases NuScale’s commercial readiness and signals to the world that NuScale is truly the frontrunner in the race to bring SMRs to market," said NuScale CEO John Hopkins.

Doosan Enerbility has accelerated the development of SMR manufacturing technology. In September 2021, the company sealed a contract with X-energy, an American small modular reactor company, to participate in the development of a high-temperature gas-cooled reactor that uses helium gas as a coolant instead of water.