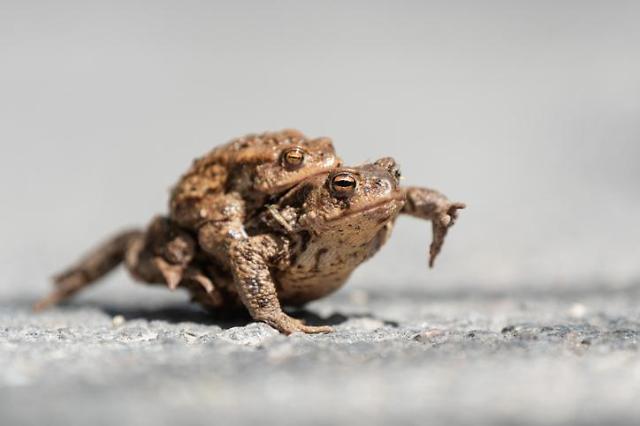 
SEOUL -- A rare ordinance has been enacted by local assemblymen in South Korea to protect an ecosystem for the Asiatic toad between their habitat in a mountain and a spawning ground in the middle of a residential area.

The Asiatic toad is a species of toad endemic to East Asia. The species is relatively rare on the Korean Peninsula. The Asiatic toad avoids dense forests, but is found in most other habitats, including grasslands, open forests, meadows, and cultivated areas. It prefers humid areas.

In traditional Korean folklore, toads have been regarded as a symbol of financial fortune, but their habitats have been ruined by development across South Korea. There is one of the main toad habitats in Cheongju, the capital city of North Chungcheong Province.

The city's council voted on April 25 to enact an ordinance aimed at reducing roadkill or deaths in artificial waterways during the spawning season. The ordinance has been proposed by 12 council members, including Park Wan-hee, to establish escape facilities or modify city-managed roads, drains and agricultural waterways used by the Asiatic toad living in wetlands and embankments.

"This ordinance is not a perfect protection measure as it is enacted for the first time in the country, but it is meaningful as we created an institutional basis for taking measures in the public domain and gradually expanding them to the private sector," Park told reporters.

The Asiad toad mainly inhabits the area of Mout. Guryong. During the spawning season in March, a large number of toads can be seen moving in groups from their hillside habitat and descending to a nearby artificial embankment that has been used to water rice paddies. After spending the tadpole period, they move to the mountain again, but young toads move slowly, with only two percent of them going up safely to their habitat.

A toad ecological park with two ponds was created in December 2006 in a large apartment complex with the help of civic groups and citizens who have held difficult negotiations to win concessions from apartment developers. The park has four toad paths, and various species of flowers, grass, and trees were planted.