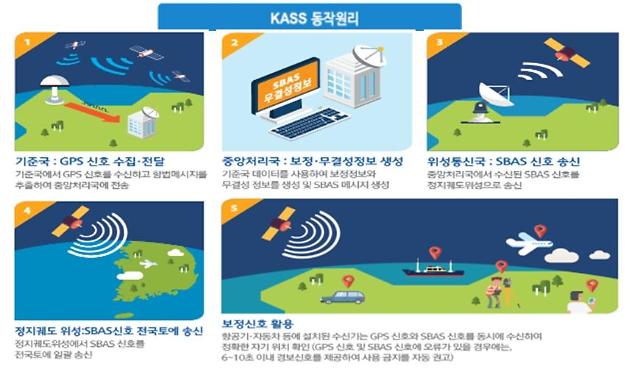 SEOUL -- South Korea will provide a pilot service for the safe flight of aircraft by correcting GPS errors in real-time probably in December 2022 using the first satellite dedicated to its independent satellite-based augmentation system (SBAS). It is an international standard system that provides accurate location information by satellite.

Malaysia's MEASAT-3d communication satellite has been leased for 15 years. European heavy-lift space launch vehicle Ariane 5 carrying the MEASAT-3d satellite equipped with a repeater for South Korea's SBAS service will be launched from a space center in French Guiana in June, according to the Ministry of Land, Infrastructure and Transport.

As GPS signals travel down to the Earth from space, the layers of the atmosphere refract and slightly delay signals, interfering with the range solutions from the GPS receiver on the ground to the satellite, resulting in positional errors of several meters. The performance of global navigation satellite systems such as GPS can be improved by SBAS. Using measurements from ground stations, correction messages are created and sent to one or more satellites for broadcast to end-users as differential signals.

SBAS is essential for applications where accuracy and integrity are critical. In the aviation sector, GPS does not satisfy strict operational requirements set by the International Civil Aviation Organisation (ICAO) for use in such critical flight stages as final approaches. With the addition of SBAS, ICAO standards are satisfied.

South Korea is the seventh country to join an ICAO campaign for the propagation of SBAS by developing the Korea augmentation satellite system (KASS), after the United States, the European Union, India, Japan, Russia and China. A roadmap, presented at a meeting of government officials and experts from state research bodies, universities and Korean Air on April 28, calls for a pilot SBAS service from December 2022. A full service is to begin in late 2023 after the system's safety and reliability are verified.

The ministry aims to launch a second satellite in 2025 and the third one in 2027. "We will make every effort to make final preparations for the successful launch of the first satellite and to upgrade KASS and leap forward as an aviation powerhouse in the future," Joo Jong-wan, a ministry official in charge of airport policy, said in a statement.

Since 2014, some 128 billion won ($101 million) has been invested to establish ground infrastructure including seven reference stations, two satellite communication stations and two integrated operating stations, the ministry said, adding that tests have been conducted at home and in France.

South Korea will try to localize core technologies and launch more satellites for the implementation of the Korean positioning system (KPS) by 2035. SBAS and KPS can be applied to autonomous driving, unmanned flying vehicles, precision maritime operations, and precision missile strikes.

KPS is based on seven satellites that can provide independent positioning and navigation signals over an area spanning a 1,000-km radius of Seoul. The goal is to prove an ultra-precision location data service and reduce the error range of positioning in its service area to less than one meter. KPS is essential for national security and the development of new technologies such as personal air vehicles and air taxis. In June 2021, the United States agreed to provide help for the development of KPS.