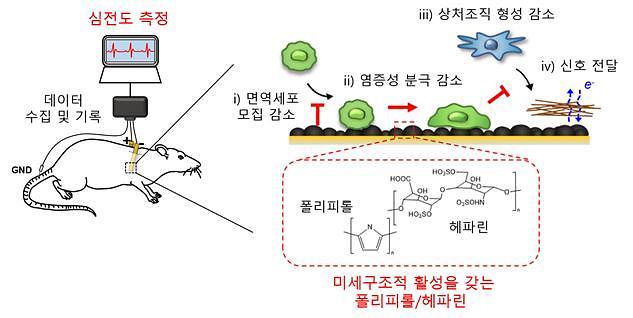 SEOUL -- South Korean researchers have developed a technique that can be used for reducing inflammatory tissue reactions caused by bioelectrodes used in medical implants. When a body shows a foreign body reaction to implants, tissues that come in direct contact with electrodes can become inflamed or thick with scar tissues to lower the performance of the medical device.

Foreign body reaction (FBR) is an inevitable process that takes place when foreign material is implanted into the body. The implant damages tissues around it to trigger an inflammatory process. After weeks or months, the inflammatory process develops into a fibrotic response in which tissues envelop and isolate the implant. The fibrotic process greatly reduces the performance of implanted bioelectrodes.

The National Research Foundation of Korea (NRF) said that a research team from Gwangju Institute of Science and Technology (GIST) discovered a solution to reduce the inflammatory reaction by developing gold-based electrodes using polypyrrole, an organic polymer, doped with heparin which is an anticoagulant used to decrease the clotting ability of blood. The bioelectrodes were created to have different surface roughness by controlling the charge densities during the electrochemical synthesis of the conductors.

Researchers said that thanks to their optimized surface roughness, the heparin-doped polypyrrole bioelectrodes were able to minimize the inflammation caused by implants. They found that inflammatory reaction by macrophage polarization was greatly reduced when the newly-developed biosensors were implanted into the tissue of a live mouse.

"We hope the newly-developed bioelectrodes will provide a solution to solve FBRs caused by various medical implant materials," GIST Professor Lee Jae-young said in a statement on April 28.