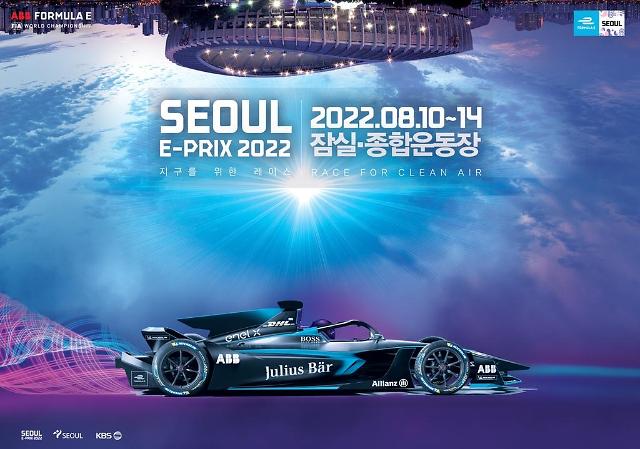 SEOUL -- Formula E, a city-based single-seater electric car motor racing championship originally scheduled to be held in Seoul in 2020, will finally capture motorsport fans in South Korea in August. The global racing event was suspended for two years due to a coronavirus pandemic.

The EV racing championship in southeastern Seoul will be held on August 13 and 14, the South Korean office of Formula E said in a statement. The event will take place at an urban racetrack set up near Jamsil Sports Complex, a multi-purpose sports facility built for the 1988 Summer Olympics and the 1986 Asian Games. Formula E Korea and the Seoul city government will jointly hold a festival to hold various events such as K-pop concerts, DJ festivals, and Pokémon parades.

Starting with Saudi Arabia's Riyadh, the 2021~2022 season has been held in a total of 15 rounds in nine cities, including Mexico City, Rome, Monaco, Berlin, Jakarta, New York, and London. The final 14th and 15th rounds will be held as "double headers" in Seoul to determine the season champion. Global automakers would field 22 machines, 22 drivers, and 11 teams. Lucas di Grassi, a Brazilian racing driver who won Formula E's 2014 Beijing race will compete in the race.

To raise awareness about the benefits of EVs, BTS was appointed as the event's global ambassador in December 2019. "With air pollution presenting the single largest environmental risk to human health today and causing more deaths each year than smoking cigarettes, both Formula E and BTS hope to inspire the next generation and millions of young fans to embrace clean energy and become future drivers of electric vehicles," FIA said.