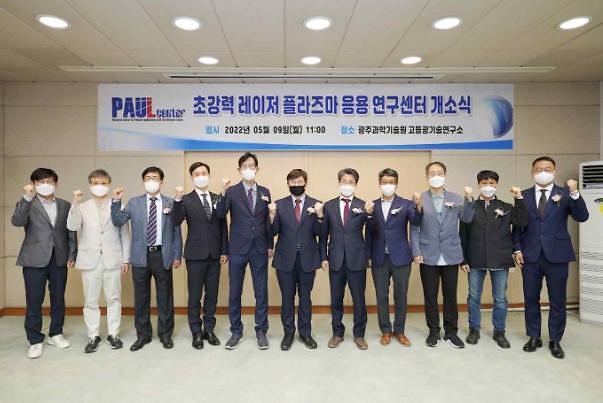 [Courtesy of Gwangju Institute of Science and Technology ]

SEOUL -- A research body in South Korea launched a five-year research project to develop ultra-strong laser and laser-plasma technologies that can disable enemy electronic equipment such as drones and unmanned robots. Super-strong lasers can instantly damage all objects, quickly hitting the core of a weapon.

"We can quickly neutralize many small weapons and effectively respond to the enemy's smart attack threats with super-strong femtosecond laser plasma," Kim Hyung-taek, a senior GIST researcher who will head the laser research center, said in a statement, citing an "urgent" need to develop new defense weapons due to growing concerns over attacks by small drones, portable missiles, and unmanned robots.

A pulsed laser having a very high instantaneous power of terawatts, a unit of power equal to one trillion watts, for an instantaneous time in the femtosecond area may instantly ionize all objects to form a plasma state, GIST said. A femtosecond is one quadrillionth of a second. A femtosecond laser emits light pulses with durations between a few femtoseconds and hundreds of femtoseconds. It thus belongs to the category of ultrafast lasers or ultrashort pulse lasers.

When a super-strong femtosecond laser travels in the air, ionization and nonlinear focusing occur at the same time, creating the filament plasma of hundreds of micrometers, which can propagate ultra-strong laser pulses a long way off With super-strong laser pulses focused like fiber optics. It can be applied to the development of a technology that damages small drones and missile sensors in the laser path without a precise focusing device.

A quick scan of the direction of the super-strong femtosecond laser can form a filament plasma shield structure in the air, allowing the development of a defensive weapon that damages the core of attack weapons passing through the shield area, the institute said, suggesting that when a super-strong femtosecond laser is focused in the air and irradiated to heavy metals, it can generate high magnetic field plasma and radiation and high-intensity electromagnetic pulse (EMP) instantaneously.

In May 2021, Hanwha Corporation was selected for a military project to develop an oscillator for laser weapons that would be used for short-range air defense against small unmanned aircraft like drones. A laser emits light through a process of optical amplification based on the stimulated emission of electromagnetic radiation. An oscillator generates a coherent signal through resonant oscillation without an input signal. Laser oscillators are a key technology that determines the performance of laser weapons.

The Agency for Defense Development (ADD), a national agency for research and development in defense technology, would improve laser weapon capabilities to intercept fighter jets and even satellites. South Korea's long-term goal is to develop technologies to track and identify space objects and satellites with lasers.  The role of anti-satellite weapons includes defensive measures against space-based, nuclear or intercontinental ballistic missiles and nuclear weapons.

There was no official confirmation or publicity on the latest series of tests led by the Agency for Defense Development (ADD), a state defense technology development body, which has pushed for the development of laser weapons in three stages.

The Block-1 project is aimed at developing a laser weapon using light sources generated from optical fibers for short-range air defense by 2024. ADD has developed an optical fiber laser generation technology through wavelength control beam coupling that minimizes the distribution of multiple laser lights with different wavelengths through refraction and combines them into one beam.

Block-1 is a fixed system with an output of 20 kilowatts that can intercept quadrotor drones or fixed-wing unmanned aircraft within three kilometers. Block-2 is a movable laser weapon with an output of 30 kilowatts that will be developed before 2030. Afterward, Block-3 with a 100-kilowatt output and a 20 km range will be developed to intercept missiles or for use by warships and military aircraft.

Hanwha Group units are involved in the development of laser weapons including an oscillator, high-power laser light sources and sensor systems. ADD will continue to improve the laser weapon's capabilities to intercept fighter jets and even satellites in the future.

South Korea's long-term goal is to develop technologies to track and identify space objects and satellites with lasers. Anti-satellite weapons are designed to incapacitate or destroy satellites. The role of anti-satellite weapons includes defensive measures against space-based, nuclear or intercontinental ballistic missiles and nuclear weapons.