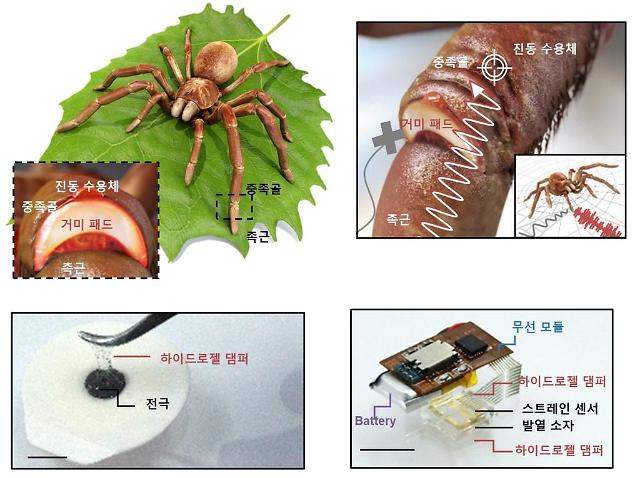 SEOUL -- South Korean researchers have developed a frequency damper that is capable of neutralizing vibration noise so that a bioelectric module can accurately read and monitor biosignals. The damper was inspired by cuticular pad spiders.

A cuticular pad is an organ located at the final segment of a spider's leg. The special soft pad is used for filtering unwanted vibrations from a spider web or from the ground when a spider is stalking its prey. The cuticular pad absorbs low-frequency vibrations while passing on high-frequency signals to vibration receptors.

As bioelectric sensors get more sensitive thanks to upgraded technology, biosignal device sensors pick up unnecessary signals. It is harder for such devices to differentiate necessary signals from unnecessary ones called "noises." External noises can cause serious problems because uneven signals can change the result of monitoring.

Sungkyunkwan University in Seoul said that its research team has developed a bioelectric sensor module with a frequency damper that can selectively filter unwanted noises. The damper picks up high-frequency biosignals while filtering out low-frequency signals such as vibrations. Researchers found that the sensor was able to stably pick up biosignals such as the heart's electrical activity and brain waves.

"The damper can act as an effective bio signal-collecting tool that can enhance the performance of electrical sensor components as well as effectively reduce unwanted external noise," Sungkyunkwan researcher Park Byeong-hak said in a statement on May 9.