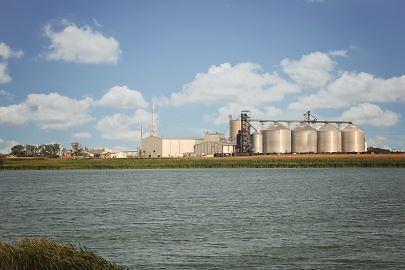 SEOUL -- SK E&S, an energy company affiliated with South Korea's SK Group, will join what would be the world's largest carbon capture project by spending $110 million to acquire a 10 percent stake in U.S. project leader Summit Carbon Solutions, a business platform that addresses the global challenge of decarbonization.

Summit's project is aimed at capturing up to 12 million tons of carbon dioxide (CO2) a year from 32 corn ethanol plants in five midwest states. CO2 captured at each plant will be transported to an underground carbon storage facility to be built in North Dakota for permanent storage through a pipeline of 3,200 kilometers (1,988 miles).

Construction is to begin in the first half of 2023 for commercial operation in the second half of 2024. For the carbon capture and storage (CCS) project, SK E&S said it would build a "CCS dream team" with Summit Agricultural Group, a diverse farming and agricultural investor, Continental Resource, a major U.S. petroleum and gas company, and private equity firm Texas Pacific Group (TPG).

SK E&S anticipates strategic synergy effects with Summit by using its biofuel business experience in the U.S. and Latin America as well as with Continental Resource which possesses know-how about various pipeline operations in petroleum and gas business.

Washington's renewable fuel standard (RFS) program calls for at least 10 percent in the ethanol volume required for blending into gasoline. Bioethanol, usually made by the fermentation of corn or sugarcane, can be used as motor fuel or an industrial raw material, but it generates  CO2 in the production process. Bioethanol produced with CCS technology can generate a carbon credit.

By participating in the U.S. CCS project, SK E&S aims to establish a bridgehead in large global CCS projects. "CCS is a critical technology that can directly reduce carbon dioxide produced in the process of using different energy sources such as natural gas and biofuels," SK E&S vice president Yu Jeong-joon said in a statement on May 10.

In March 2022, SK E&S disclosed a project to turn a gas production facility in Bayu-Undan in the Timor Sea into a CCS plant capable of storing about 10 million tons of carbon dioxide annually. The project is aimed at securing an overseas storage base that can handle carbon dioxide generated from the Barossa gas field and blue hydrogen production facilities in South Korea.

As part of a broad group-wide project to promote hydrogen as a new growth engine, SK E&S disclosed a $1.4 billion investment decision In March 2021 to develop gas fields in northern Australia and bring in 1.3 million tons of liquefied natural gas per year for 20 years from 2025.