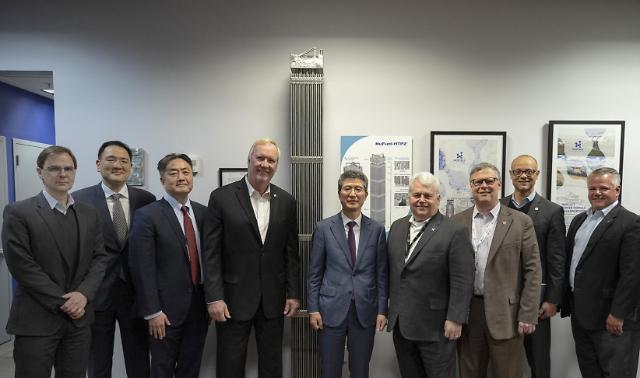 
SEOUL -- Samsung C&T, a Samsung Group unit involved in trade, investment and construction, will strengthen its partnership with NuScale Power, a small modular reactor (SMR) company in the United States. They agreed to cooperate as a strategic partner in SMR projects in Romania and other East European countries.

Samsung C&T invested $20 million in NuScale in 2021 and $50 million this year. Specific ways to expand cooperation in the global SMR market were discussed at talks on May 9 between NuScale CEO John Hopkins and Oh Se-chul, president of Samsung C&T's construction division, at their talks in NuScale's head office in Portland, Oregon.

NuScale aims to enter the global SMR market after successfully carrying out the first commercial deployment of its power plant for Utah Associated Municipal Power Systems (UAMPS). NuScale's reactors are based on a safer, smaller, and scalable version of pressurized water reactor technology. With NuScale's scalable design, a power plant can house up to 12 individual power modules. It houses the reactor core, pressurizer and steam generator inside a single containment vessel.

Samsung C&T said the two companies decided to share their technologies and capabilities from the stage of establishing a pre-construction plan to the dispatch of technical personnel for the UAMPS project. They would cooperate in research on hydrogen production using high-temperature steam and commercialization are also planned.

"Through solid partnerships with a leading SMR company, we have set up a bridgehead to expand our entry into the global market related to SMR, which is expected to continue to grow in the future," Oh said in a statement on May 10. "We will actively strengthen our portfolio of new eco-friendly businesses such as SMR, hydrogen and ammonia."

In April, NuScale and its South Korean partner, Doosan Enerbility, secured two new South Korean copemates -- GS Energy and Samsung C&T -- to jointly promote the development of SMR businesses around the world. Domestic companies think that their cooperation in SMRs will contribute to the rapid recovery of South Korea's nuclear power industry ecosystem.