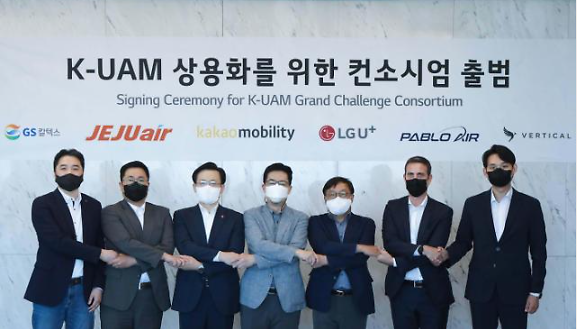 SEOUL -- Vertical Aerospace, a British aerospace manufacturer, will provide its electric vertical takeoff and landing (eVTOL) aircraft as the sixth member of a South Korean consortium that will participate in the demonstration of urban air mobility (UAM), an ecosystem covering personal air vehicles and infrastructure.

Vertical Aerospace's eVTOL aircraft is the same model that will make a pilot flight along established flight paths in Paris during the 2024 Olympics. Vertical Aerospace said its VX4 eVTOL model with a range of over 161 kilometers (100 miles) can transport four passengers and a pilot at top speeds of up to 320 km per hour.

UAM Team Korea, a public-private consultative body, has been launched to commercialize manned drone taxis in 2025, remote-controlled vehicles in 2030 and a fully autonomous service in 2035. The Ministry of Land, Infrastructure and Transport has worked out a "K-UAM Grand Challenge" program to demonstrate the safety of air taxis and test traffic management functions in two stages.

In the first stage, demonstration flights will be conducted at a state flight test center in the southern seaside county of Goheung to verify UAM infrastructure and communication relay platforms. The second-stage demonstration will be conducted in urban air corridors. Air taxis will fly through corridors, or known as virtual channels in low altitude airspaces, to prevent accidents and improve the safety of pedestrians on the land.

GS Caltex will use its gas station network to build vertiports, a vertical take-off and landing facility. The refiner has demonstrated a drone-based fuel delivery service at gas stations. Jeju Air, a low-cost carrier, provides flight services based on accumulated aviation know-how. Kakao Mobility is in charge of building a vertiport solution that implements automatic check-in and security search functions.

Dozens of domestic companies have joined hands with foreign companies such as Joby Aviation, Volocopter and Skyports to provide UAM services in South Korea. Joby works with SK Telecom, a top mobile carrier that is developing a mobile communication network for air taxis. With its American partner, Overair, Hanwha Systems aims to test an air taxi capable of flying at a maxim speed of 320 km per hour.