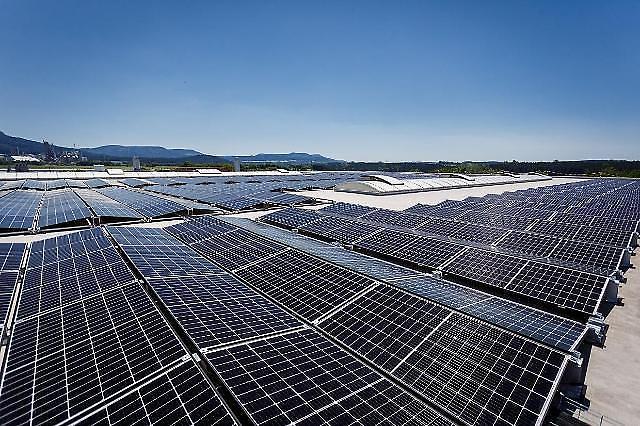 SEOUL -- Hanwha Solutions, a chemical and energy company affiliated with South Korea's Hanwha Group, will enhance the competitiveness of solar cells by building new production lines for high-performance photovoltaic cells and modules in South Korea and the United States. The new investment comes on the heels of fierce competition with Chinese companies.

At Intersolar, a solar industry exhibition in Munich, Hanwha Solutions disclosed the planned injection of some 380 billion won ($294 million) into the production of solar cells and modules based on the tunnel oxide passivated contact (TOPCon) structure, which is used for the development of high-performance solar cells by the introduction of a tunnel oxide layer between the substrate and poly-silicon.

About 180 billion won was earmarked for the establishment of a TOPCon cell line in South Korea for commercial production in the first half of 2023. Hanwha Solutions would make additional investments in domestic production and research facilities to switch lines for the production of high-performance cells.

Separately. Hanwha Solutions would invest about 200 billion won to build a 1.4-gigawatt (GW) solar module plant in the U.S., using TOPCon cells produced in South Korea. If production begins in 2023, the company's module production capacity in the U.S. would increase to 3.1 GW. Hanwha Solutions' subsidiary, Hanwha Q Cell, operates a solar module facility with an annual production capacity of 1.7 gigawatts in Georgia.

"As a leading solar energy operator in South Korea and the U.S., we will mass-produce technology-based products through preemptive investment in South Korea and strengthen the solar cell-module value chain of both countries so that the U.S. can actively respond to the demand for local products," CEO Lee Koo-yung said in a statement on May 12.

To secure a technological advantage over overseas competitors, especially in China, South Korea is actively pushing for the commercialization of new solar cell modules. In March 2022, Hanwha Solutions and Hanwha Corporation became the largest single shareholder of REC Silicon ASA, a Norway-based producer of polysilicon, a high purity polycrystalline form of silicon used as a raw material in the field of solar photovoltaics and electronics.