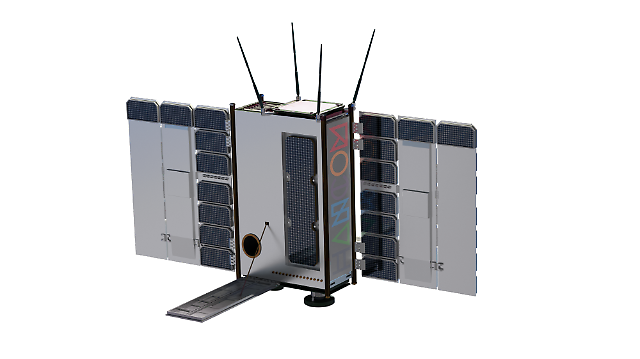 SEOUL -- South Korea's first private satellite for earth observation will be launched aboard a SpaceX rocket with the aim of providing video services in high demand for satellite data in Asia and the Middle East. The ultra-small satellite weighing 10.8 kilograms would collect image data after a one-month test operation at an altitude of 500 kilometers (310 miles).

The low-orbit satellite named Sejong 1, developed by Hancom Inspace, a subsidiary of South Korea's Hancom Group, would collect data by circling the Earth 12 to 14 times a day. The SpaceX rocket is to blast off on May 25 local time at the Kennedy Space Center in Florida.

"By accumulating satellite image data processing and AI-based analysis technology and know-how through the operation of a satellite ground station since 2012, we will lead South Korea's new space era," Hancom InSpace head Choi Myung-jin said in a statement on May 18.

Hancom will launch a second satellite in the first half of 2022 and three more by 2024. The company aims to launch more than 50 cluster satellites and provide video services that can be used to analyze crop conditions and predict grain production.

Hancom has made an aggressive investment in the drone sector by acquiring InSPACE, a satellite and UAV ground platform developer startup, in 2020. The company would release drones for special purposes and develop multiple drone control service platforms. By securing satellites, drones, and ultra-high resolution sensors, Hancom will establish a video data service belt covering space, aviation, and ground areas.

For its "Space Pioneer" program, the Seoul government has vowed to create a self-sustaining industrial ecosystem and cultivate innovative companies like Space X. South Korean companies will be supported to build a supply chain using domestic parts as much as possible. The government has proposed the development of ultra-small satellites.

Space scientists in Seoul advocate a wise strategy to target niche markets at a time when reusable projectiles that can drastically reduce costs are emerging as a game-changer. In December 2021, the state-run Korea Astronomy and Space Science Institute (KASI) unveiled the real flight model of four homemade nanosatellites weighing less than 10 kg to observe changes in space weather through formation flight.

Nanosatellite refers to an artificial satellite with a wet mass of between 1 and 10 kg. Multiple nanosatellites work together or in formation. A CubeSat, built in cube form, is a common type of nanosatellite. KASI's nanosatellites will be launched on the Russian Soyuz-2 rocket at the Baikonur launch site in Kazakhstan around June 2022. Their mission is to precisely observe the microstructure of cosmic plasma distribution and the space environment in low orbit through a formation flight that can control the distance between satellites.