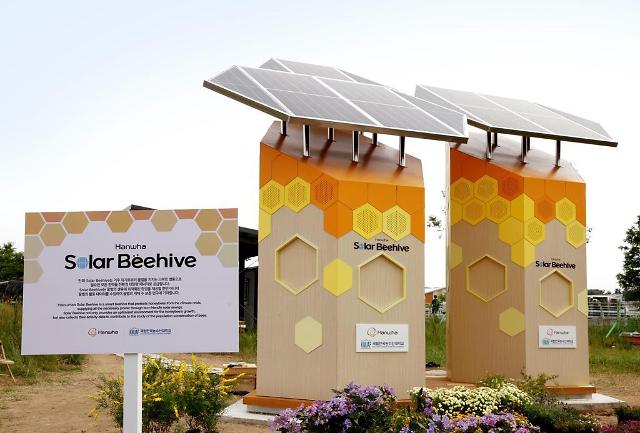 Data released by the Food and Agriculture Organization of the United Nations (FAO) showed that more than 70 percent of the main 100 crops that account for 90 percent of the world's food are produced through honeybees' pollination. However, the number of honeybees is significantly reducing worldwide. Experts have raised various hypotheses such as the excessive use of pesticides, climate change and viruses.

Hanwha Group, which has a major solar cell subsidiary, has installed a set of photovoltaic low-carbon solar beehives called "Solar Beehive" capable of accommodating about 40,000 honeybees at the Korea National University of Agriculture and Fisheries (KNUAF) in Jeonju some 200 kilometers (124 miles) south of Seoul.

Hanwha's smart solar hive is aimed at facilitating the pollination of fruit trees and plants on KNUAF's campus. Data regarding bee activities and growth collected by the smart system will be used for research on bee conservation. Electricity generated by a solar panel installed on top of the beehive will be used to maintain temperature and proper humidity.

The beehive environment can be monitored in real-time using an application, Hanwa said, adding that the Solar Beehive can detect hornets' invasion. If a hornet approaches, the entrance will turn into a small passage, allowing only honeybees to pass through.

"The Solar Beehive will effectively increase the bee population and preserve the species, as it can monitor the growth of bees in real-time and detect diseases and pests immediately," KNUAF's industrial entomology professor Kim Hye-kyung said in a statement on May 19.

To address concerns among beekeepers, KB Financial Group, a financial holding company in South Korea, will launch a "K-Bee" project to recover a honeybee ecosystem by planting about 100,000 trees used by honeybees for four years in Hongcheon, a mountainous county east of Seoul. On the rooftop of the group's headquarters in Seoul, an urban beehive was installed to keep some 120,000 honeybees.

The National Agricultural Cooperative Federation proposed an emergency injection of 20 billion won ($15.6 million) to support bee farms.
© Aju Business Daily & www.ajunews.com Copyright: All materials on this site may not be reproduced, distributed, transmitted, displayed, published or broadcast without the authorization from the Aju News Corporation.