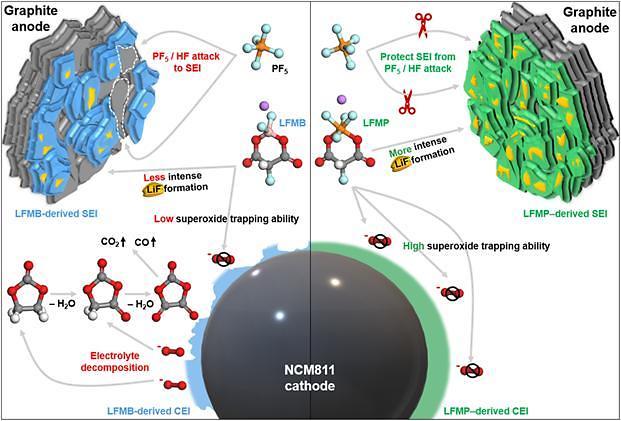 SEOUL -- A joint team of researchers has developed an additive that can be applied to the electrolyte of large-capacity batteries and increase the lifespan of electrodes -- cathodes and anodes -- by preventing  degradation by heat. The additive can become useful in the development and commercialization of log-life batteries for electric vehicles.

Large-capacity batteries normally use cathodes with high nickel content and anodes made of carbon materials for better conductivity and output. However, nickel-rich materials are easily degraded by heat. When cathodes and anodes are degraded and no longer efficient enough to transfer electricity, the battery has to be removed.

The Daegu Gyeongbuk Institute of Science and Technology (DGIST) said that a research team involving researchers from DGIST and Dongguk University developed an electrolyte additive using lithium tetrafluorophosphate (LFMP) to create a protective layer on the cathode and anode of large-capacity batteries. The protective layer helped electrodes maintain integrity and efficacy after they were charged and discharged 250 times in a heated environment at about 60 degrees Celsius (140 degrees Fahrenheit). The additive also helped the battery maintain its initial charge voltage for some 80 days.

According to DGIST, the newly-developed additive can become the key to solving the degradation of electric vehicle batteries and increasing the lifespan of battery packs. "We will contribute to the development of large-capacity batteries by developing an additive that can be immediately added to commercial lithium-ion batteries," the institute said in a statement on May 23.