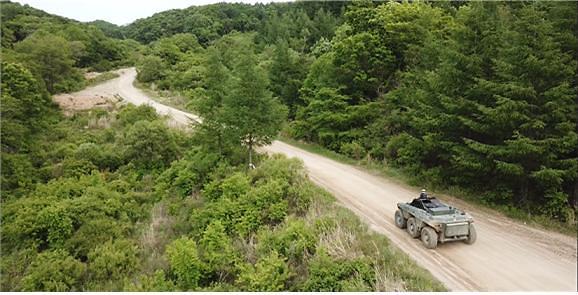 Normally, self-driving technologies are designed for ordinary commercial vehicles traveling on paved roads. It is hard for the conventional AI-based system to safely travel through off-road terrains with uneven surfaces and indistinct boundaries between road and non-road areas.

The all-terrain autonomous driving technology uses deep learning techniques to learn how to effectively move through off-road and rough terrains, the Agency for Defense Development (ADD) controlled by the Defense Ministry, said, adding that the new technology allows unmanned vehicles to move through rough terrains at a high speed.

The development of the all-terrain autonomous driving technology has a great meaning as it showed potential for the adoption of AI for problem-solving in the weaponry sector, the agency said.

In October 2021, Hanwha Defense, a South Korean defense contractor, collaborated with an army infantry division to start a test operation of a six-wheeled unmanned military vehicle that can carry up to 500 kilograms (1,102 pounds) of cargo and travel more than 100 kilometers (62.1 miles) per charge. The multi-role vehicle can carry casualties from frontlines.