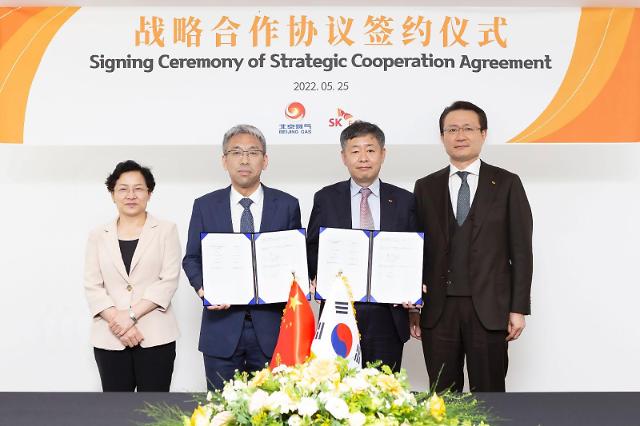 
SEOUL -- SK E&S, an energy company affiliated with South Korea's SK Group, secured a bridgehead to expand its business influence in China's natural gas and hydrogen markets, through a strategic alliance with a major gas company based in Beijing.

SK E&S said it has signed a strategic collaboration agreement with Beijing Gas Group, a city gas supplier in Beijing and adjacent areas, to establish a strategic partnership in liquefied natural gas (LNG) and hydrogen businesses in China. They would share their operational know-how on LNG terminals in China and cooperate further on LNG imports and sales.

Beijing Gas Group's LNG terminal, which is under construction in Tianjin, will be used to produce blue hydrogen based on carbon capture, utilization and storage (CCUS) technology. The two companies would consider producing green hydrogen, building hydrogen fuel cell power plants, and mixing hydrogen into natural gas pipes. Blue hydrogen is produced by applying carbon capture and storage to reduce carbon emissions. Green hydrogen does not use any fossil fuel during its manufacturing process.

Blending hydrogen into a natural gas pipeline network can accommodate significant volumes of hydrogen, but it is not possible to simply exchange natural gas for hydrogen in the existing natural gas system. Some metal pipes can degrade when they are exposed to hydrogen over long periods.

As part of a broad group-wide project to promote hydrogen as a new growth engine, SK E&S disclosed a $1.4 billion investment decision in March 2021 to develop gas fields in northern Australia and bring in 1.3 million tons of LNG per year for 20 years from 2025. In March 2022, the company disclosed a project to turn a gas production facility in Bayu-Undan in the Timor Sea into a CCS plant capable of storing about 10 million tons of carbon dioxide annually. The project is aimed at securing an overseas storage base.