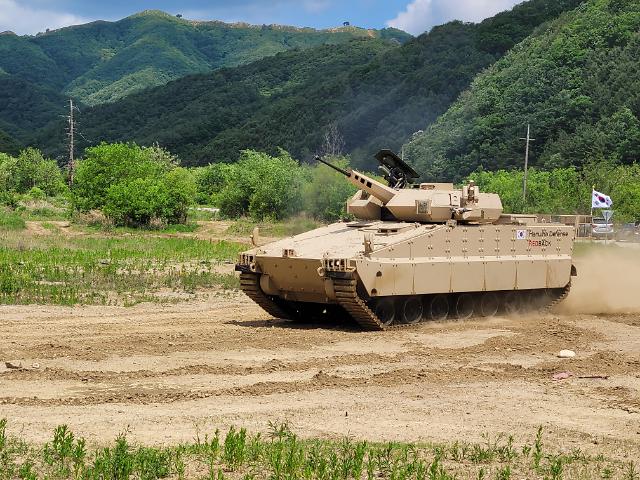 SEOUL -- The war in Ukraine is changing the paradigm of armored urban warfare. Unlike predictions made by many military specialists, Russia's heavily-armored vehicles including tanks suffered a severe blow from determined Ukrainian soldiers and militia who ambushed in a jungle of buildings and urban structures.

While wheeled vehicles were caught up in a deathtrap of mire outside cities, tracked vehicles including tanks found it hard to detect guerilla attacks from rooftops and high-rise buildings because of limited vision. The slogging metal hulks became an easy target for anti-tank missiles shot just around the corner of a street or from the window of an apartment.

Many Russian tanks were destroyed by fast-moving light infantry fighting vehicles that zoomed between buildings and through narrow streets to carry anti-tank personnel to where they were needed. Ukraine's military insists that Russia has lost some 1,330 tanks and 3,250 armored vehicles.

"The demand for armored vehicles like the Redback seems to be increasing because of the war in Ukraine," Hanwha Defense's overseas business division head Lee Boo-hwan said at a media event that took place on May 27 to demonstrate the superiority of Hanwha's next-generation infantry fighting vehicle called "Redback" at the training camp of an army panzer battalion in Hongcheon, 60 kilometers (37 miles) east of Seoul.

Many Russian tanks and armored vehicles have been destroyed in Ukraine, with wheel vehicles trapped in muddy fields, Lee said, highlighting Redback's ability to attack enemy troops positioned on higher grounds such as rooftops using the main gun whose angle can be lifted to about 80 degrees. "It has no blind spots with more than a dozen sensors around it."

"What we witnessed in the ongoing war in Ukraine was the change in the paradigm of armored warfare. In urban warzones, armored vehicles need to be more maneuverable and sturdy," Lee said. "The purpose of infantry fighting vehicle is to punch through the battlefield to safely carry infantry." 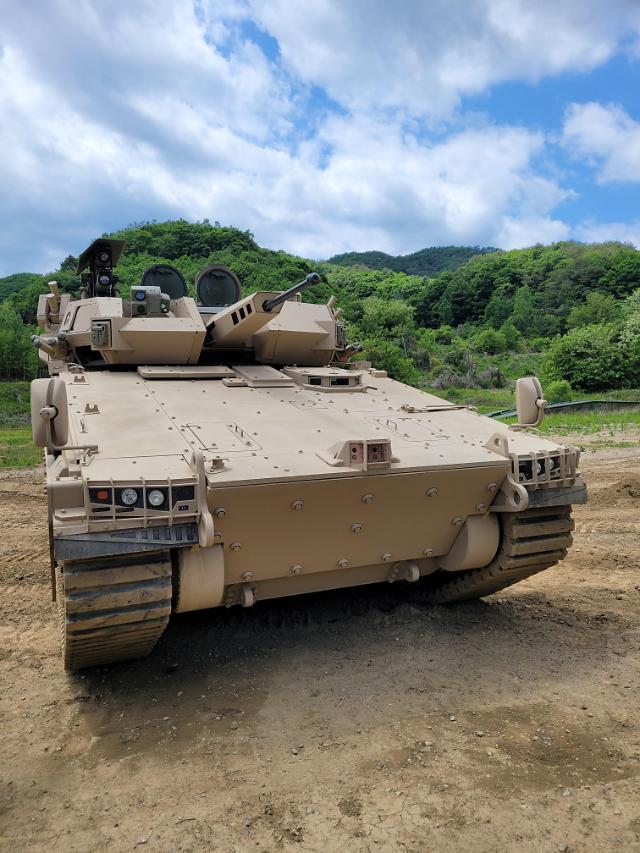 Hanwha Defense hopes to promote the Redback as a second-hit product after K9 Thunder, one of the world's most popular self-propelled howitzers, which has been adopted by Turkey, India, Poland, Norway, Finland, Estonia, Egypt and Australia.

It's not just a hope as interest is growing in some European countries. "We will strengthen Redback's competitiveness in the global market through active marketing in U.S. and European markets," Lee said, speaking proudly of the superiority of the Redback. "We cannot say in detail, but Northern European countries have expressed their interest in the Redback. Because the Redback shared the same engine and transmission with the K9, many countries would find it easier to manage and repair it."

At the media event that wrapped up the six-week domestic evaluation of its operational fit, Hanwha's tracked armored vehicle demonstrated its excellent off-road maneuverability through an obstacle course, including a ramp and a muddy puddle of water, as well as pivot steer, turret rotation and troop dismounting.

The domestic trial began on April 18, a month after a Redback prototype called AS21 returned home following its successful test and evaluation in Australia. Three prototypes have been tested in Australia, competing with the Lynx developed by Rheinmetall Landsysteme of Germany. The winner will be selected in the second half of 2022.

South Korean evaluators were satisfied with Redback's reliability, maneuverability, and lower noise levels than that of conventional armored vehicles. "The reliability and sophisticated technology of the Redback were proven through the six-week trial run in South Korea, providing a strong basis for international sales and marketing," said Brigadier General Cho Hyun-ki, a senior official from the Defense Acquisition Program Administration (DAPA), an arms procurement agency.

"We will actively support overseas exports by providing Australia and Europe with Redback's latest performance and reliability," Cho said, adding that the South's military would consider acquiring a Korean version of the Redback under a fast-track program, which procures new weapons systems in a shortened period.

The Redback drew positive comments from U.S. military officials who regard it as "very innovative," Lee said, revealing a goal to develop an electric and combustion engine hybrid powertrain for the U.S. military.

Hanwha Defense's U.S. partner, Oshkosh Defense, has dispatched observers for Redback's trial operation in South Korea. A consortium led by Oshkosh and Hanwha Defense is competing for the concept design of a new armored combat vehicle that would replace M-2 Bradley infantry fighting vehicles as part of the optionally manned fighting vehicle (OMFV) program, which is a key element of the US Army's modernization efforts. The Oshkosh consortium is trying to leverage the proven capability of the Redback.

The Redback appealed with a multilayer protection system during its trial in Australia, which gave priority to the safety of crew members. "Safety is the most important thing in Australia," Soh Il-ho, a Hanwha Defense researcher, said, adding the Redback has a high level of armor to protect the crew inside against anti-tank missiles, mines and other weapons.

"We have no plans to adopt the Redback. However, I came to this event to see what the Redback is. Because we are allies with Australia, it is important for us to see if we are able to link our weapons system to Australia's," a New Zealand military official told Aju Business Daily on condition of anonymity, as he looks carefully inside and out of the Redback.

Hanwha Defense has designed the Redback with innovative technologies to maximize the survivability of soldiers inside, such as a thermal camouflage system that provides a stealth function to avoid heat-tracking missile attacks and the detection of thermal monitoring equipment.

"The mobile camouflage system is equipped with an external device that shields heat, making it difficult to be detected with naked eyes. Even if infrared cameras are used, its shape is unclear," Soh said.

Iron Fist can effectively intercept projectiles such as the RPG-7 anti-tank grenade launcher and the FGM-148 Javelin, an American-made portable anti-tank missile system. Unlike other systems, Hanwha Defense said that the active defense system can detect such weapons at higher angles and 360 degrees. 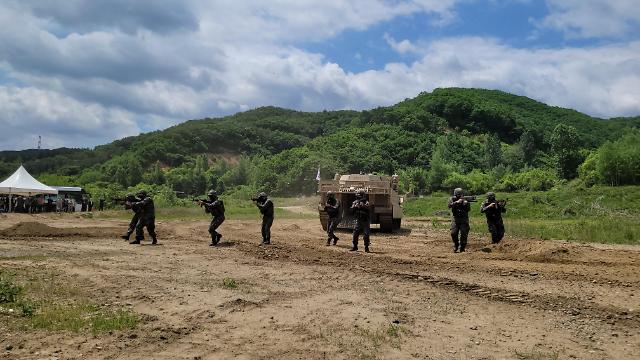 The Redback with up to 11 people aboard can move at a maximum speed of more than 65km per hour on paved roads and 43km on unpaved roads. Based on Korean standards, it has an operation range of 520km and can overcome one-meter-high vertical obstacles and cross 2.5m wide trenches and a puddle of water 1.5m deep when equipped with snorkels or auxiliary devices.

The offboard health and usage management system (HUMS) monitors and diagnoses component faults in the early stages. Through a 360-degree surveillance system, crew members can share the same screen. Iron Vision projects the image outside the vehicle onto the crew's helmet-mounted displays.

A hybrid turret is mounted with a pair of fire-and-forget anti-tank missiles, a 7.62mm machine gun, and a 30-mm-caliber gun capable of firing various types of ammunition, including the high-velocity armor-piercing round (HVAP) that can neutralize light armored vehicles and light tanks.

Composite rubber tracks reduce noise and vibration significantly while offering superior ride quality. Compared to iron tracks, their on-road durability is much longer. "Rubber tracks have a much longer lifespan than metal tracks and make less noise," Lee said. "We have put in a lot of effort to reduce the noise the redback makes. We have specially designed the engine room and the area around it to greatly reduce the noise."

The in-arm type hydro-pneumatic suspension unit allows more space for add-on armor to mitigate blast underneath. Other advantages include reduced weight that can save fuel by nearly 30 percent.

The development of the Redback was based on South Korea's K21 infantry fighting vehicle, which has been in service since 2009. The K21 can carry nine passengers and three crew members, with its turret equipped with a 40mm automatic cannon and an advanced fire control system that can track targets as far as 6km (3.7 miles). The gunner's sight is equipped with a thermal viewer and laser rangefinder.

For its bid in Australia, Hanwha offered the Redback and support equipment, including a command-control vehicle, a rear-end vehicle supporting firepower and reconnaissance, a recovery vehicle, a repair vehicle, a transport vehicle, a barrier-clearing vehicle, a mortar vehicle, and a logistics vehicle.