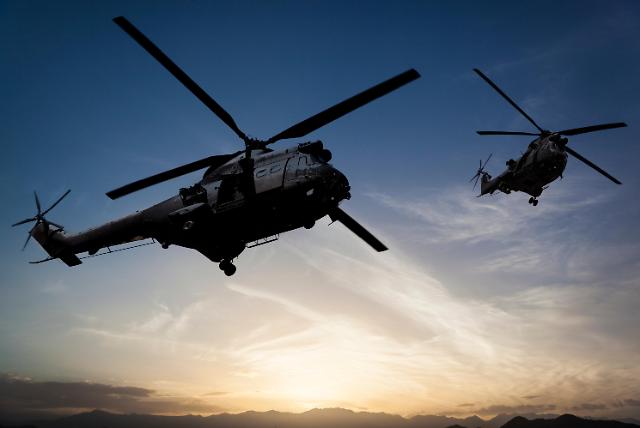 SEOUL -- South Korea's state arms procurement agency won approval to push for the development of a mine-sweeping marine helicopter, based on a homemade transport utility model which has been used by marine troops. The helicopter searches for and destroys mines in the sea and underwater.

A conference chaired by Defense Minister Lee Jong-sup has endorsed a military project to develop a helicopter based on Marineon, the amphibious variant of South Korea's homemade transport utility helicopter called "Surion." The Defense Acquisition Program Administration (DAPA) said that some 970 billion won would be spent from 2022 to 2030.

The mine-sweeping helicopter will be equipped with an airborne laser mine detection system (ALMDS), an airborne mine neutralization system (AMNS), and an autonomous underwater vehicle (AUV), DAPA said.

ALMDS using pulsed laser light detects, classifies and localizes floating and near-surface moored mines. It enables helicopters to conduct mine detection operations at greater speeds. AMNS lowers an expendable, self-propelled neutralizer into the target position and searches for mines, with a fiber-optic cable relaying information between the operator in the helicopter and the neutralizer.

To replace an aging fleet of utility helicopters for military and civilian use, Korea Aerospace Industries (KAI), the sole aircraft maker in South Korea, has developed the Surion with technical assistance from Airbus, a European aircraft manufacturer. Surion's development was completed in July 2012.

A Marineon chopper crashed on a test flight at a naval airbase in July 2018, killing five soldiers. State inspectors found that poor heat treatment caused a crack in the roto mast provided by a French company. Marine Corps commanders called for the deployment of highly maneuverable and field-proven helicopters, but the defense ministry favored homemade weapons.