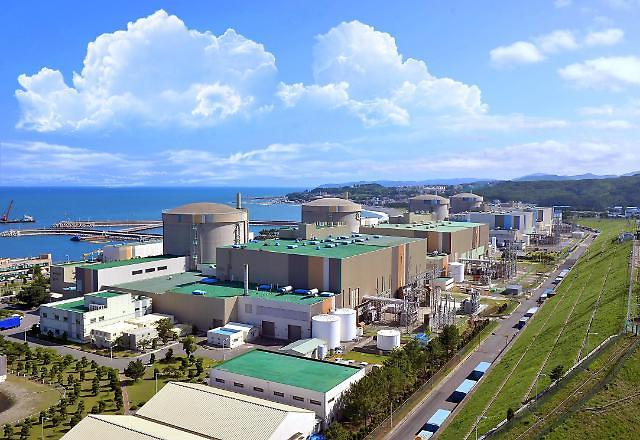 [Courtesy of the nuclear plant operator in Wolseong]

SEOUL -- With the blessing of President Yoon Suk-yeol, South Korea's nuclear power industry grabbed a new opportunity to rebound after policymakers endorsed a massive injection of state money for the development of a relatively safe small modular reactor called "i-SMR" that can be operated in an underground water tank and cooled naturally in case of emergency.

Up to Yoon's expectations, the proposed development of i-SMRs has passed a preliminary feasibility study, according to the Ministry of Science and ICT. Some 399.2 billion won ($319.9 million) will be spent from 2023 to 2028 for the i-SMR project aimed at developing a reactor with a power generation capacity of less than 300 megawatts.

The science ministry described SMRs as a "gamechanger" for the nuclear power market and said South Korea aims to develop "an innovative SMR that is competitive in terms of economy, safety and flexibility to preoccupy the world's SMR market."

Homemade i-SMRs will be manufactured in the form of a module at a factory for easy transportation to secure economic feasibility, the ministry said, adding the i-SMR project would create an opportunity to strengthen the export competitiveness and ecosystem of South Korea's nuclear power industry.

Mainly through partnerships with American companies, South Korean companies have jumped into the SMR market, such as Hyundai E&C and Doosan Enerbility, a key player in South Korea's nuclear industry that tied up with NuScale Power, an SMR company in the United States.

In May 2022, Samsung C&T strengthened its partnership with NuScale Power to cooperate in SMR projects in Romania and other East European countries. SK Group tied up with TerraPower for cooperation in the development and commercialization of SMR technology.

Separately, the government approved the proposed spending of 348.2 billion won from 2023 to 2030 to develop technologies for the dismantling of defunct reactors. There have been growing concerns about nuclear waste and the management of spent fuel because Washington refused to ease restrictions on the development of reprocessing facilities to acquire enriched uranium as fuel.

Hyundai E&C has tied up with its American partner, Holtec International, for the decommissioning of defunct nuclear power plants, starting with the Indian Point Energy Center in Buchanan in Westchester County.