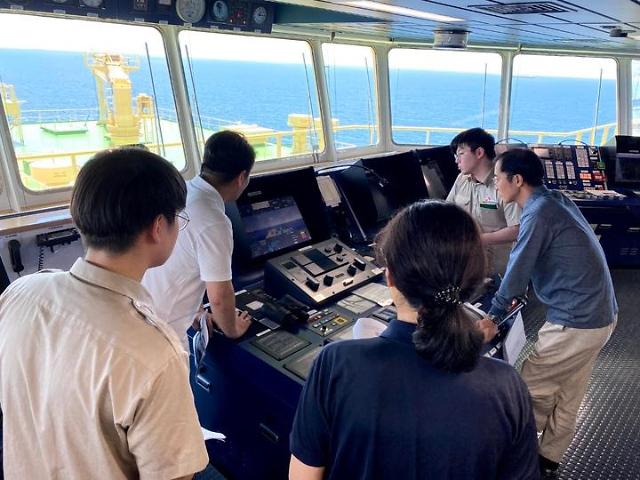 SEOUL -- In a landmark operation monitored by U.S. and South Korean maritime classification societies, a giant natural gas carrier installed with a self-sailing system developed by Avikus, the in-house venture of South Korea's Hyundai shipbuilding group, has made a successful transoceanic voyage for the first time in the world.

The Prism Courage, a 300-meter-long super-large liquefied natural gas (LNG) carrier, has successfully completed its autonomous ocean crossing in a joint operation with SK Shipping, a domestic shipping company, Avikus said, adding that the voyage was conducted under real-time monitoring by Korean Register (KR) and the American Bureau of Shipping (ABS) for objective verification.

The ship has arrived at an LNG terminal in Boryeong, about 140 kilometers (87 miles) southwest of Seoul, after crossing the Pacific Ocean for 33 days, starting from Freeport, a port city on the Gulf of Mexico, on May 1 and covering a total of 20,000km with half of the distance operated autonomously.

"It is meaningful in that we have successfully tested the second stage system that actually moves ships beyond the first stage of autonomous operation technology that guides an optimal route," Avikus CEO Lim Do-hyeong said in a statement on June 2.

Avikus has developed an advanced voyage support system called HiNAS and an intelligent berthing assistance system called HiBAS. HiNAS automatically recognizes surrounding vessels through camera analysis to alert the risk of collision based on augmented reality. Even when visibility is not secured, infrared cameras comprehensively provide information such as the location and speed of obstacles.

Avikus said that the test ship had avoided the risk of collision more than 100 times by accurately recognizing the location of other ships on its route. The company would commercialize HiNAS 2.0 in the second half of 2022r after receiving a certificate from ABS.

In June 2021, a 12-seat cruise boat equipped with Avikus' self-sailing system made a safe test voyage covering 10km without direct human intervention through a narrow canal in the southeastern industry port of Pohang. The boat was able to cope with various unexpected situations using special cameras and lidar which measures distance by illuminating the target with laser light.

South Korean shipbuilders work hard to develop smart ship technologies that can be divided into unmanned ships ruled by an operator from a control center onshore and autonomous ships which use a computer on board that takes decisions about the route, speed, fuel consumption, maintenance and even mooring in the harbor.