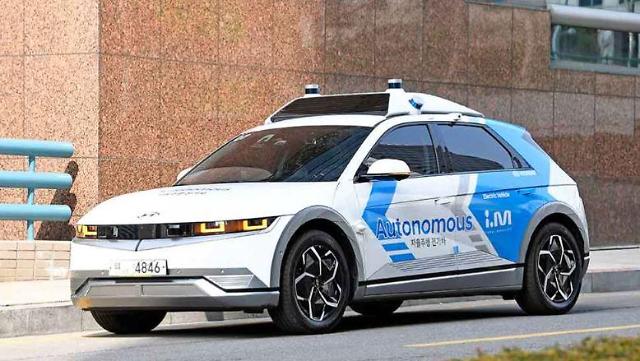 SEOUL -- A pilot car-hailing service using two electric vehicles with autonomous driving technology began in one of the most congested areas in Seoul. South Korea's Hyundai auto group has turned IONIQ 5 models into level 4 self-driving vehicles that require intervention by human drivers only in case of an emergency.

A ceremony was held on June 9 at a Hyundai Motor building to launch the pilot service called "RoboRide" in Gangnam, a crowded commercial district in southern Seoul. Jin Mobility, a domestic startup operating an artificial intelligence-powered car-hailing mobility platform, is in charge of operating the service for six hours from 10 a.m. (0100GMT) to minimize any possible inconveniences on the road.

The RoboRide vehicle perceives, makes decisions, and controls its own driving status, while its safety driver will only intervene under limited conditions, Hyundai said, adding that up to three passengers can be on a ride, with a safety driver responding to any emergencies. After going through a pilot operation, the service will be provided to the general public free of charge in August.

For safe operation, a cooperative intelligent transport system (C-ITS) provides real-time information such as traffic conditions so that individual vehicles could share data and prevent traffic accidents. Hyundai said its remote vehicle assist system supports the trip with remote assist functions, such as changing the lane under circumstances where autonomous driving is not feasible.