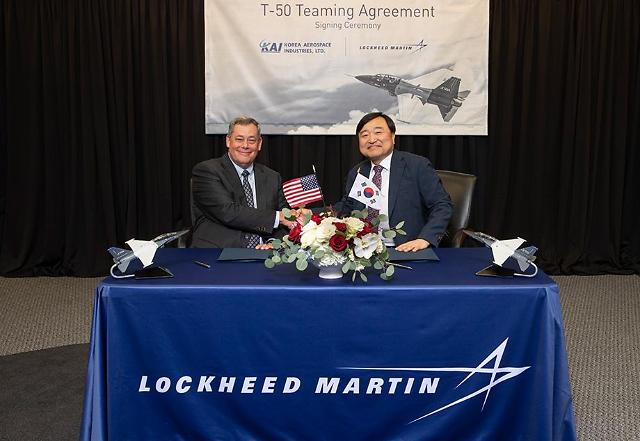 SEOUL -- Korea Aerospace Industries (KAI), the sole aircraft maker in South Korea, bolstered a strategic partnership with its American partner, Lockheed Martin, to push for global sales of their joint product, shaking off their previous failure to win a Pentagon contract.

With Lockheed Martin's technology, KAI produced South Korea's first supersonic trainer, T-50, which has been developed into aerobatic and combat variants such as FA-50. KAI has exported or secured orders to export T-50 trainers and light combat aircraft to countries such as Indonesia, the Philippines, Thailand, Malaysia and Iraq.

KAI and Lockheed Mart made a fresh commitment, and a teaming agreement was signed between KAI CEO Ahn Hyun-ho and Lockheed Martin's executive vice president Greg Ulmer to sell more than 1,000 T-50 aircraft and its variants globally. KAI said that the two companies would form one team to target global markets for trainer jets and light attack aircraft.

KAI thinks global demands for light attack aircraft are growing due to Russia's invasion of Ukraine. KAI and Lockheed Martin decided to operate a steering committee, which will cooperate in the design, aircraft improvement, factory expansion, production and marketing of improved aircraft to be presented to the U.S. Air Force and Navy.

"With the formation of a single team with Lockheed Martin, exports of the T-50 series will face a breakthrough," Ahn said in a statement posted on June 12.  KAI promised to increase the range of its T-50 aircraft and combat variant while strengthening armament for global sales. Lockheed Martin has been in the competition with Boeing for a U.S. Air Force development and acquisition program for a new two-seat jet trainer. Boeing and its Swedish partner Saab took the first contract in 2018.