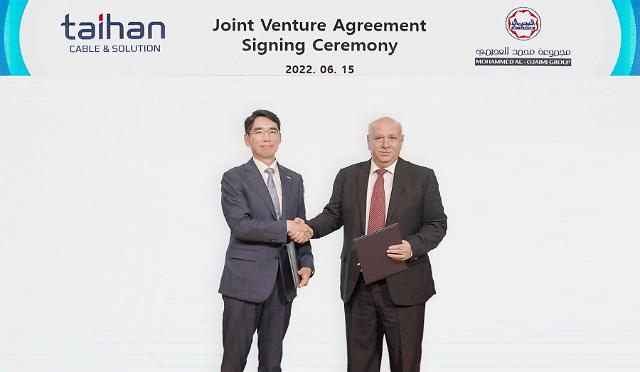 SEOUL -- Taihan Cable & Solution, a power cable and grid infrastructure company in South Korea, agreed with its Saudi partner to invest $80 million in a joint venture plant at an industrial park in Riyadh that will produce high voltage power cables targeting clients in the Middleast, Europe and Africa.

Under a deal signed in Seoul, Taihan will own 51 percent of the joint venture named "Saudi Taihan Cable & Solution," and the remainder controlled by Mohammed Al-Ojaimi Group, an electrical and wiring contractor in Saudi Arabia. The two companies aim to complete the construction of their joint plant in 2023 near Taihan's production base in Riyadh.

With the construction of its new plant, Taihan Cable said it will be able to secure price competitiveness in the production of cables and power devices that make up high-voltage power grids. The company has tried to establish an overseas production network with factories in Vietnam, South Africa, Kuwait, and Saudi Arabia amid growing protectionism and rising logistics costs.

"The establishment of a joint venture with a local competitive company, especially in the Middle East where we have been traditionally been strong, will serve as a strength to push ahead with projects quickly and stably in times of difficult international conditions, such as supply chain problems, the Ukraine crisis, and protectionism," Taihan Cable CEO Na Hyung-kyun said in a statement on June 16.