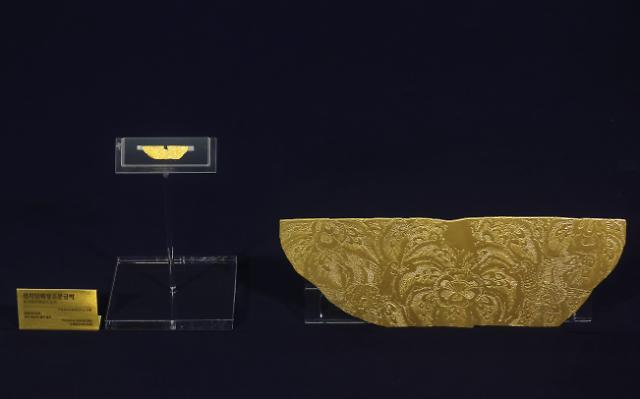 SEOUL -- An exquisite and delicate eighth-century relic depicting two birds and flowers by drawing countless thin lines about half the thickness of hair on a paper-thin gold foil has been restored for public exhibition. It is almost impossible to identify with the naked eye and can only be examined using a microscope, wowing modern craftsmen.

The tiny pure gold artifact was shown in a media event on June 16, a day before it was to be displayed at an exhibition hall of the Gyeongju National Research Institute of Culture Heritage in the southeastern city of Gyeongju, which used to be the capital of Silla (57 BC~935 AD), an ancient kingdom which once ruled about two-thirds of the Korean Peninsula.

The artifact was discovered at the ruined site of Silla's royal palace in Gyeongju in November 2016. Bird and flower patterns were intricately engraved using a very fine seal graver, amazing experts at how Silla craftsmen carved out such a mysterious work.

"We don't know who completed the pattern in the absence of artifacts such as a magnifying glass," Kim Kyung-yeol, a Gyeongju institute curator, told reporters, expressing his surprise at the dexterity of Silla's goldwork. The exact use was not confirmed, but researchers believe the patterns of two birds facing each other appear to be related to the Silk Road.

It was presumed to be an ornament attached to wood or metal objects. "It seems to have cut out only the part to be used after engraving the pattern on a wide gold leaf," Kim said. "It may not be just for decoration, but for dedication to God." 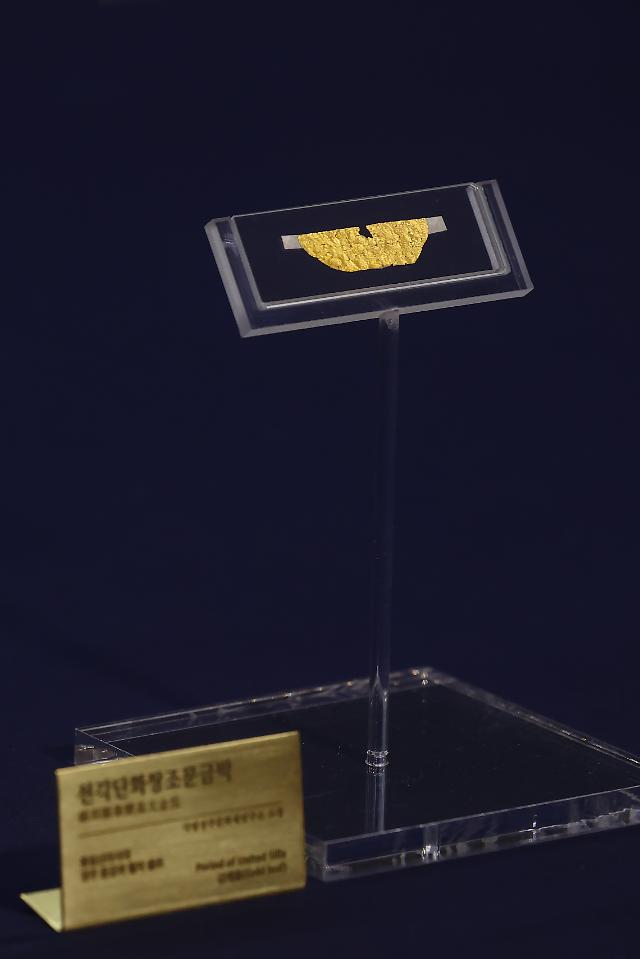 Gold with a purity of 99.99 percent was carefully selected to produce the gold leaf, which is 3.6cm wide, 1.17cm long, and 0.04mm thick. It weighs 0.3 grams. The thickness of the line drawn is less than 0.05mm. Two birds were placed symmetrically on the trapezoidal cross-section, and flowers were engraved in the center and around the bird.

Such a delicate pattern can be crafted just with modern equipment such as lasers. "There is no ancient relic in the world that has such an elaborate pattern," Han Jeong-ho, a professor at Dongguk University's  ancient art and history department in Gyeongju, said, defining the artifact as an ultra-precise Silla painting drawn on gold paper

The birds are thought to be Oriental turtle doves, the Gyeongju institute said in a statement, adding that the artifact is considered one of the finest examples of metalwork among all artifacts discovered on the Korean peninsula. "Although this gold leaf reveals western influences, it is clear that the patterns show a unique Silla style that depicts the patterns in a highly realistic manner."

"Although there are currently no examples to determine how the gold leaf was used and its function, the shape of the artifact suggests that it was the end piece of an unknown object with a trapezoidal cross-section," the institute said.