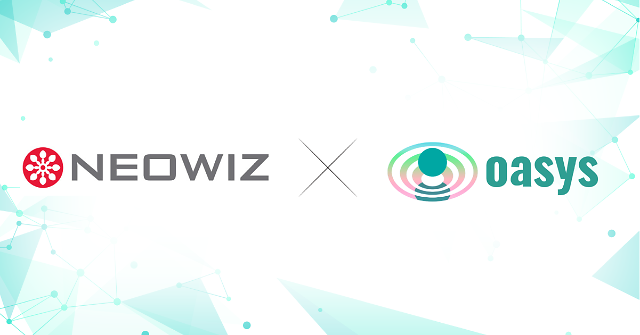 SEOUL -- Neowiz, an online game publisher in South Korea, joined Oasys, a gaming blockchain designed to build a decentralized metaverse by connecting different play-to-earn games within its ecosystem. The Oasys team focuses on solving the problems faced by game developers when building blockchain games on Ethereum.

Neowiz hopes to share overall experiences related to the development, service, and operation of blockchain games and metaverse with the Oasys blockchain, which aims to drive innovation in the blockchain gaming industry because of its proof-of-stake (POS) consensus mechanism, which is used to validate transactions through randomly selected validators.

"As the Oasys project has a goal of 'Multiverse,' where multiple verses are existing at the same time while retaining the original value of each verse, we intend to cooperate for the development and growth of the ecosystem," Neowiz co-CEO Bae Tae-geun said in a statement on June 17. "Based on the experience and know-how we would gain as an initial validator, we will build a partnership and promote mutual growth."

Oasys said Neowiz would become the 21st initial validator for the Oasys ecosystem as it prepares its own blockchain platform and plans to expand and develop ecosystems such as nonfungible token (NFT) and the metaverse with various partners.

Oasys director Daiki Moriyama urged Neowiz to participate as an important contributor to the growth of the Oasys ecosystem and the multiverse initiative where multiple metaverses pursuing different values exist at the same time.

Other South Korean game developers in the queue to join the Oasys blockchain are Com2us, Netmarble, which has actively invested in metaverse entertainment, and WeMade which created "The Legend of Mir," a free-to-play fantasy massively multiplayer online role-playing game based in an ancient oriental world.

Oasys, officially launched on February 7, partnered initially with 21 gaming and Web 3.0 tech companies to act as validators who can secure and verify the transactions of different play-to-earn games and content creators. Web 3.0 is a new iteration of the blockchain-based World Wide Web that incorporates concepts including decentralization and token-based economics.

Technologists have described Web 3.0 as a possible solution to concerns about the over-centralization of the web in a few big tech companies. Web 3.0 could improve data security, scalability, and privacy beyond what is currently possible with Web 2.0 platforms that center on user-created content uploaded to social media and networking services, blogs, and wikis, among other services.