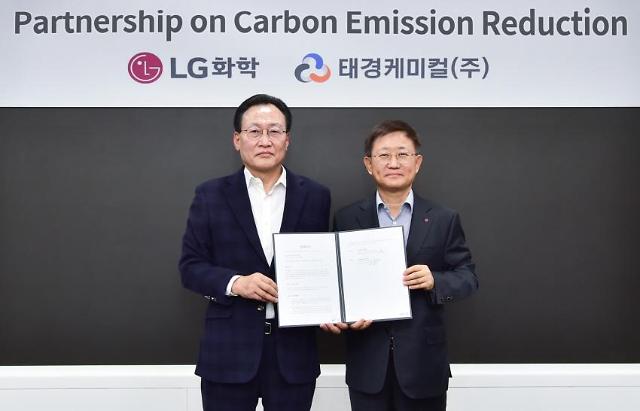 
SEOUL -- LG Chem, a chemical unit of South Korea's LG Group, will build a new plant capable of producing some 50,000 tons of hydrogen annually. Methane will be converted to hydrogen through a chemical reaction using high-temperature steam, and hydrogen will be depolymerized for use as fuel again.

At its production base in Daesan, about 100 kilometers (62 miles) southwest of Seoul, LG Chem will produce hydrogen from methane off-gases generated by a naphtha cracking center (NCC) in the process of producing feed-stocks. Construction is to begin in the first half of 2023 for completion by the second quarter of 2024.

Base chemicals such as ethylene, propylene and butadiene are made by breaking down naphtha at high temperatures. Methane is commonly used as a heat source. LG Chem said the plant would reduce carbon emissions by 140,000 tons annually by replacing methane used in the NCC process with high-purity hydrogen.

LG Chem has introduced environmental, social, and corporate governance (ESG), a trendy corporate operation method that focuses on the use of green energy and environmentally-friendly management, by fostering its production base in Daesan as an ESG business mecca for the production of bio and eco-friendly materials, waste plastic recycling, and greenhouse gas reduction.

LG Chem said the hydrogen plant in Daesan is a key component of its strategy to increase the use of renewable energy in the NCC process by up to 70 percent by 2025, and to actively utilize hydrogen in the production of renewable bio feedstocks such as hydro-treated vegetable oils (HVOs), which are a biofuel made by the hydrocracking or hydrogenation of vegetable oil.

Hydrocracking, which breaks big molecules into smaller ones using hydrogens, can be used to create substitutes for gasoline, diesel, propane, kerosene and other chemical feedstock. Diesel fuel created by hydrotreating is called green diesel.

In September 2021, LG Chem partnered with Dansuk Industrial, a domestic biodiesel company, to establish a joint venture for South Korea's first HVO production by 2024. HVO raw materials would be used to produce high absorbent resin, polyvinyl chloride (PVC), and acrylonitrile butadiene styrene, a common thermoplastic polymer known as ABS which is widely used in manufacturing household and consumer goods as well as medical and industrial products.\