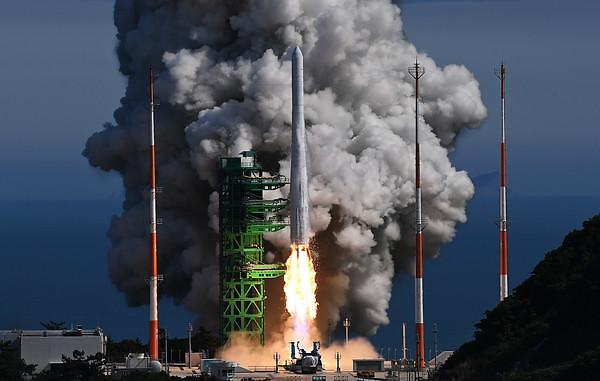 SEOUL -- South Korea launched its homegrown space rocket that put satellites into target orbit, becoming the seventh country in the world to have developed a space launch vehicle that can carry a more than one-ton satellite. It was South Korea's first successful launch of a satellite with actual functions.

The three-stage rocket called "Nuri," also known as KSLV-II, blasted off from the Naro Space Center in the country's southern coastal village of Goheung on June 21. Through data analysis, engineers confirmed that a performance verification satellite carried by Nuri was orbiting the Earth at an altitude of around 700 kilometers (435 miles) from the surface and at a speed of around 7.5 km per second.

The rocket reached its target orbit and successfully separated a performance verification satellite and put it safely in orbit, Lee said, declaring that South Korea has become the seventh country to launch a homegrown projectile from its soil after Russia, the United States, France, China, Japan and India.

Nuri was loaded with a 162.5-kilogram performance verification satellite and four micro cube satellites for academic research as well as a 1.3-ton aluminum dummy satellite. Seven days later on June 29, cube satellites will be separated sequentially to carry out independent missions. Finally, the dummy cube satellite will be released to see if the injection tube works properly.

The performance verification satellite will verify devices containing core space technologies, such as a battery that generates electricity using temperature differences, a control moment gyroscope, and an S-band antenna that transmits commands. The devices will be used in future space projects such as moon exploration.

Although Nuri succeeded in reaching its target altitude in its first launch in October 2021, it failed to release a dummy satellite into orbit due to a technical glitch caused by its third-stage engine that burned out earlier than expected. Engineers have reinforced an anchoring device of the helium tank inside Nuri's third-stage oxidizer tank.

Nuri is 47.2 meters long and weighs about 200 tons. The first stage uses a cluster of four 75-ton liquid engines. A 75-ton liquid-propellant engine was designed for the second stage and a seven-ton liquid engine for the third stage. The third launch is set for the first half of 2023.

South Korea will push ahead with the development of a next-generation launch vehicle called "KSLV-III" that can thrust bigger payloads for lunar or Mars exploration using a mixed fuel of liquid oxygen and kerosene.
KSLV-III is a two-stage launch vehicle that will be more advanced and larger than Nuri. It will use five 100-ton liquid engines clustered for its first-stage projectile and two 10-ton liquid engines for the second stage. The first launch of KSLV-III may come in 2030.

Nuri uses a gas generator engine, which has lower thrust power than multi-stage combustion engines. The next-generation launch vehicle will use technologies such as multi-time ignition, thrust control and a staged combustion cycle that allows propellant to flow through multiple combustion chambers for combustion in stages. KSLV-III's fuel efficiency is high, but its main disadvantage is engineering complexity.

The economic feasibility of two-stage projectiles is greater than that of three-stage projectiles. The science ministry has proposed a study on a liquid methane engine. Methane has a higher performance than other fuels. Selecting liquid methane is a prevailing trend for recent rocket engine developments due to its affordability, reusability, storability for deep space exploration, and prospects for in-situ resource utilization.

As reusable projectiles that can drastically reduce costs emerge as a game-changer in the space industry, the ministry called for the development of re-ignition and thrust control technologies in preparation for reusable launchers.

The science ministry presented an action plan in March 2022 to develop a lunar lander weighing more than 1.5 tons that would carry out scientific research on the surface of the moon in the early 2030s. Nuri can thrust up to 3.3 tons of payload into Earth's low orbit, while the next-generation launch vehicle will be designed to thrust up to 10 tons into low orbit and 3.7 tons into a geostationary transfer orbit.

For its Space Pioneer" program, the Seoul government has vowed to create a self-sustaining industrial ecosystem and cultivate innovative companies like Space X, a U.S. aerospace company. South Korean companies will be supported to build a supply chain using domestic parts as much as possible.

Technology will be accumulated through four more launches by 2027 of the Nuri rocket capable of placing a satellite into Sun-synchronous orbit, which is a nearly polar orbit around a planet, in which the satellite passes over any given point of the planet's surface at the same local mean solar time. It is useful for imaging, reconnaissance satellite, and weather satellites.