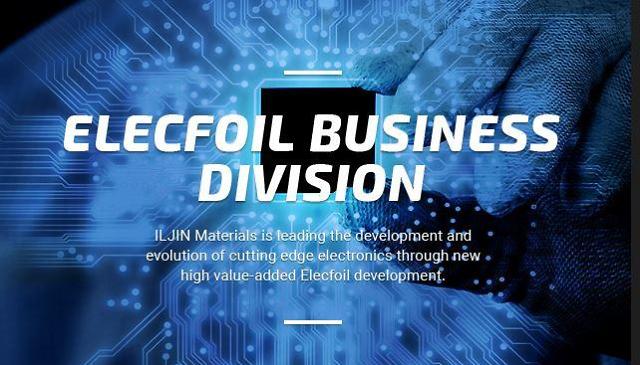 
SEOUL -- Iljin Materials, the producer of core materials for lithium batteries in South Korea, has clinched a long-term order worth 8.52 trillion won ($6.56 billion) from Samsung SDI to provide Elecfoil, a thin copper foil used as a core material for rechargeable batteries, by the end of 2030.

In a regulatory filing on June 24, Iljin said it would supply 60 percent of copper foil required by Samsung SDI annually. Iljin said the supply of Elecfoil may change from 55 to 80 percent depending on Samsung SDI's total usage, leading to the fluctuation in the contract money between eight trillion and 10 trillion won.

Iljin has vowed to differentiate its domestic plant into high-value products for semiconductors, with its Malaysian plant specializing in Elecfoil. The deal came a month after Samsung SDI, the battery-making unit of Samsung Electronics, disclosed an investment of over $2.5 billion to build its joint venture battery plant with Stellantis N.V., an automotive manufacturing company headquartered in Amsterdam, in Kokomo, Indiana.

The Indiana plant aims to have an initial annual production capacity of 23 gigawatts hours (GWh) that can go up to 33 GWh. Production is to begin in the first quarter of 2025. It would be Samsung SDI's first battery plant to be built in the US. Samsung SDI will apply its cutting-edge technology to the U.S. facility which will supply battery modules for a range of vehicles produced at Stellantis’ plants in North America.

There are three types of batteries - prismatic, pouch and cylindrical. Samsung SDI has secured a competitive advantage in terms of performance and cost by producing prismatic batteries. Prismatic cells are encased in aluminum or steel for stability and satisfy the demand for thinner sizes. Wrapped in packages, prismatic cells make optimal use of space and allow flexible design but they can be more expensive to manufacture and have a shorter cycle life than cylindrical design.