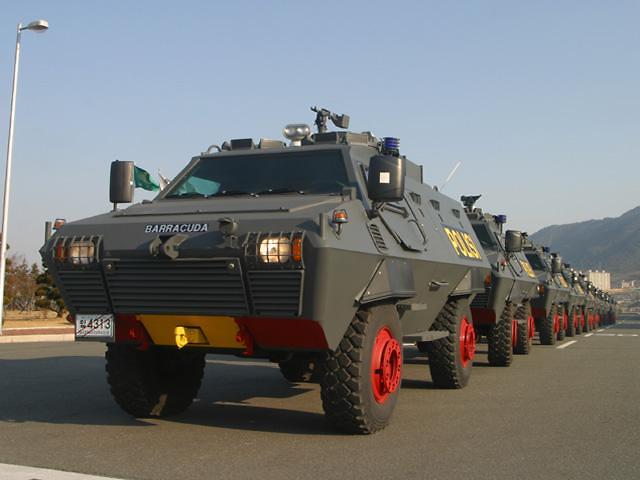 Barracuda vehicles have been operated by police forces in Indonesia and Vietnam, as well as South Korean troops deployed in Iraq for humanitarian and rehabilitation operations.

"As a leading developer of armored combat vehicles in the world, Hanwha Defense is fully dedicated to meeting the needs of the Indonesian end-user under the latest contract," Kim Dae-young, senior executive vice president of Hanwha Defense's overseas business center, said in a statement on July 6.

Barracuda is safe with bullet-resistant windows and yet it provides a wide range of views, which enables smooth driving under any driving conditions, Hanwha Defense said. Based on a Mercedes-Benz FGA special chassis, the 12.5-ton vehicle is covered with steel plate armor to provide ballistic protection against 7.62mm caliber armor-piercing shells.

The vehicle capable of transporting up to 15 people has a top speed of 100 kilometers (62 miles) per hour and a long-range driving distance of 1,160 km. It uses run-flat tires to allow for running at 30km/h even when the air pressure is lost and can be equipped with a roof-mounted small-caliber weapon station, CCTV, GPS, a Dozer blade and an amplifier.

Barracuda is a four-wheel vehicle. For Asian customers, Hanwha Defense has showcased its next-generation Tigon armored personnel carrier with six wheels. The Tigon has a combat weight of 21 tons and can carry up to 11 crew. Powered by a 525-horsepower engine, the vehicle has a maximum road speed of 110 km per hour with an operational range of 800 km. It is able to move in water with a top speed of 8.5 km per hour.

With its modular design, the Tigon can be armed with different types of weapon systems such as a 7.62 mm machine gun, 2.7 mm and 30 mm guns mounted on a remote-controlled weapons system, and a 90mm cannon. The vehicle armor is reinforced to Improve bullet and mine protection capabilities.