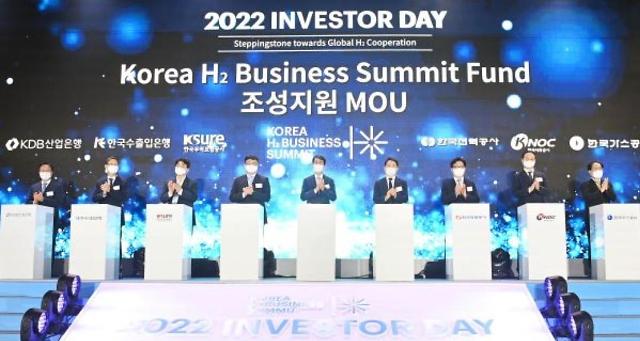 SEOUL -- Unswayed by uncertainties triggered by South Korea's new energy roadmap that prioritized nuclear power over renewable energy, a private business association involving major business groups revealed their determination to accelerate the establishment of a hydrogen ecosystem with the launch of an H2 fund worth about 500 billion won ($384 million).

Mirae Asset, a top asset managing group in South Korea, will recruit investors by the end of 2022. "The proportion of hydrogen in energy utilization is increasing, and hydrogen will be at the end of our decarbonization journey," Mirae Asset's securities business head Bahn Sang-woo said at a Korea H2 Business Summit meeting on July 6. "Pre-investment should be made to achieve the hydrogen economy."

Yoon dumped a "nuclear-exit" policy adopted by the previous government, citing internal and external uncertainties such as the Russia-Ukraine war that disrupted a global energy supply chain and prompted major countries to reset their energy policies. Decisions on the proportion of renewable energy will be made in the fourth quarter of 2022.

H2 Business Summit was launched in September 2021 by major business groups and companies involved in hydrogen-related businesses, four years after South Korea organized H2KOREA, a private-government body that serves as a control tower for the promotion of South Korea's hydrogen economy.

"The fund can secure the completeness of a value chain by building an investment portfolio," Bahn said, adding the H2 fund can help avoid overlapping investments by individual companies and attract financial capital to guarantee returns. He suggested that 70 percent of the fund can be invested in building infrastructure and 30 percent in developing technology.

Choi Yong-ho, partner of Deloitte, the secretariat of H2 Business Summit, predicted that about 33 percent of South Korea's energy use will be hydrogen by 2050. "It means that South Korea will become the country that uses hydrogen most actively."

Because of growing concerns about a dwindling supply of oil and emissions of pollutants, some countries have actively tried to adopt hydrogen fuel for their public transport system. South Korea has spearheaded a campaign to bring forward a hydrogen society by establishing international standards so that international cooperation between countries and businesses can be achieved more quickly and effectively.