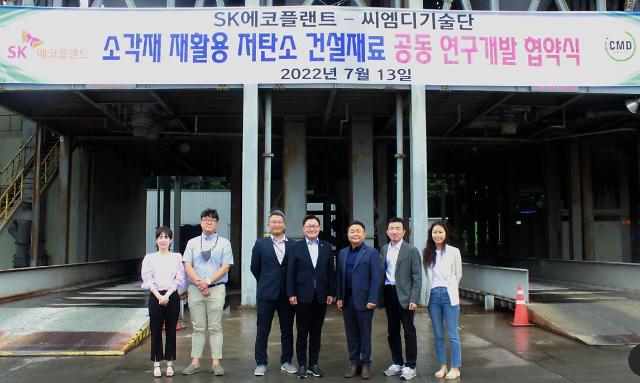 Under a technology development agreement, SK ecoplant will provide incineration ash, while CMD will mix it with concrete to manufacture large wall blocks and sidewalk blocks for use at construction sites.

"We will do our best to export environmental technologies and solutions to the global market while nurturing the environmental business as an important axis of the circular economy, not just a waste disposal business," SK ecoplant's Eco Lab Center head Kim Byung-kwon said in a statement on July 14.

Data from the state-run Korea Environment Corporation, cited by SK ecoplant, showed that South Korea's waste incineration facilities have treated about 9.12  million tons per year as of 2020. The amount of incineration ash stood at about 2.16 million tons.

Incineration ash was difficult to recycle. Although it was recycled as bricks or sidewalk blocks, expansion or cracking significantly reduced the strength of aggregates using concrete mixed with incineration ash. SK ecoplant said that exothermic chemical reaction materials were found to remove pollutants and odors while increasing compressive strength.

In a pilot test, the proportion of incineration ash that can be mixed without affecting aggregate quality increased to up to 60 percent from 20 percent by using CMD's technologies such as nonsintered inorganic binders and expansion-reducing reactants. With new technologies, SK ecoplant said it can secure cost competitiveness and reduce greenhouse gas emissions.