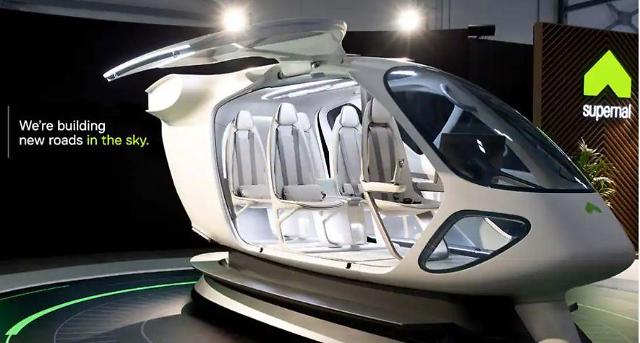 
SEOUL -- Engineers and designers have mimicked a butterfly to create a lightweight interior cabin made of forged carbon fiber for an electric vertical takeoff and landing aircraft (eVTOL) being developed by the urban air mobility team of South Korea's Hyundai auto group.

Supernal, a mobility service provider set up by the auto group in the United States, revealed its five-seat eVTOL vehicle cabin concept at the Farnborough International Airshow, a trade exhibition in England.

The cabinet concept features grab handles built into cabin doors and seatbacks to assist with ingress and egress, a combination of lighting including overhead lights inspired by automobile sunroofs adjusts with the various stages of flight to emulate a "light therapy" effect, and a minimized bulkhead that allows for generous headroom and package functionalities.

"The Supernal eVTOL vehicle draws on the competence of the Hyundai Motor Group and the skillset of experienced automotive designers, which allowed us to develop a new air mobility concept that is not only safe and rational but also highly emotional," Hyundai Motor Group's chief creative officer Luc Donckerwolke said in a statement released on July 18.

Supernal’s battery-powered eVTOL vehicle is designed for intra-city passenger journeys starting in 2028, while engineers based in South Korea are developing a hydrogen-powered mid-sized vehicle for city-to-city cargo and passenger journeys.

Hyundai is a member of UAM Team Korea, a public-private consultative body that would commercialize drone taxis in 2025. In 2021, Hyundai partnered with ANRA Technologies, a U.S.-based cloud-based drone operational platform developer, to develop the operating environment for AAM.