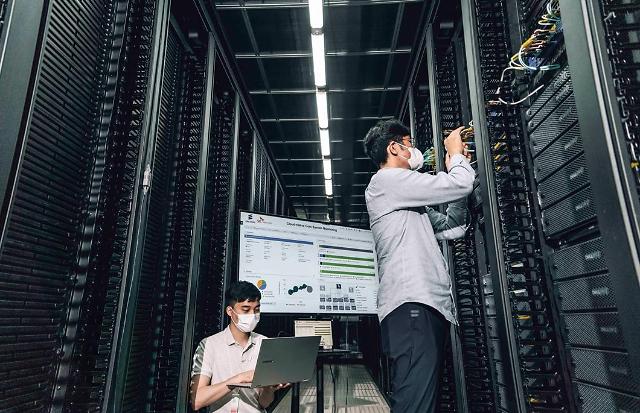 
SEOUL -- Through cooperation with Ericsson, a Swedish networking and telecom company, South Korea's top mobile carrier SK Telecom has commercialized a new core network that can greatly improve the distribution of new applications and the efficiency of traffic processing, securing the foundation for 6G evolution.

A core or backbone network connects together different networks to transfer traffic at high speeds. Core networks focus on optimizing the performance and reliability of long-distance and large-scale data communications.

SK Telecom (SKT) and Ericsson have successfully gone live with a bare metal cloud-native 5G network for the first time in the world, improving traffic processing efficiency by up to 50 percent compared to existing physical-based cores. Bare metal cloud means that cloud-native applications are deployed in containers directly without the need for a virtualization layer between the hardware and the application.

The new core network allows for the rapid introduction of new functions and services, SKT said, adding that it can greatly improve service performance and has the advantage of shortening work hours and efficiently responding to traffic changes through quick response.

"Based on the commercialization of the cloud-native-based 5G core, we have laid the foundation to provide cutting-edge ICT services more efficiently and stably," SKT's infra technology head Park Jong-kwan said in a statement on July 21.

As a frontrunner in disseminating 5G mobile services, South Korea aims to achieve the world's first commercialization of 6G mobile telecommunication. SKT has tied up with major equipment makers including Nokia and Ericsson on joint research into 5G upgrading and 6G evolution technologies.

"With the bare-metal cloud-native 5G Core solution, SKT is reconfirming its ambitions to lead the way in creating a future-focused, versatile 5G network," Monica Zethzon, head of Ericsson's solution area packet core, was quoted as saying.

SKT and Ericsson think that the next-generation 5G core will be suitable for personalized services as well as various types of on-demand services required by companies and institutions. It can be widely used in various media services including metaverse and smart factories.