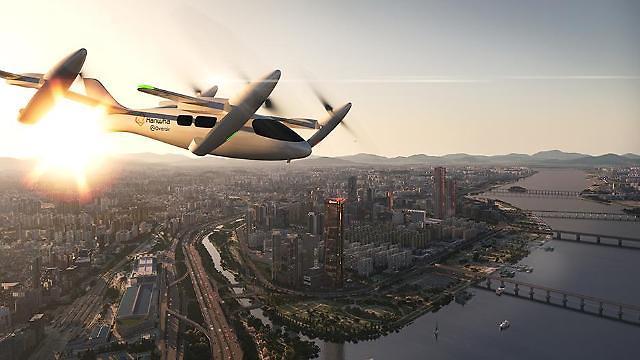 
SEOUL -- South Korea's Hanhwa Group revealed an aggressive strategy to preoccupy a future air mobility market by forging a series of partnerships with foreign companies with superior technologies in the manufacturing of various flying vehicles that could be used for air taxis and personal air vehicles.

Hanwha Systems signed a memorandum of understanding with Honeywell on the joint development of an electric vertical takeoff and landing (eVTOL) vehicle and an advanced air vehicle (AAV) for autonomous and long flights. Their cooperation covers a hybrid electric propulsion system, the discovery of new services and creating demand in domestic and foreign markets.

In a separate deal, Hanwha Systems and Hanwha Aerospace signed a tripartite agreement with Safran to strengthen all-round business cooperation in military and civilian sectors, space and mobility industries. The French company develops and manufactures aircraft engines, rocket engines as well as various aerospace and defense-related equipment or their components.

The three companies would actively cooperate in areas such as low-orbit satellite communication services for urban air mobility (UAM), a propulsion system with economic efficiency, and satellite launch services.

"We want to find new convergence business opportunities in the UAM market by utilizing each company's strengths with major players in the global aerospace industry," Hanwha Systems' UAM business head Yoo dong-wan said in a statement on July 21.

Along with Overair, Hanwha Systems would release an unmanned life-size prototype in the first half of 2023. They aim to produce an air taxi called "Butterfly" that can fly at a maxim speed of 320 km per hour. The air taxi will be applied with the tiltrotor design of low noise and high efficiency. Tiltrotor design combines the vertical lift capability of a helicopter with the speed and range of a conventional fixed-wing aircraft.

An electromechanical actuator that converts electricity to mechanical force is a core component for personal air vehicles. Vertical's eVTOL model, VX4, is claimed to be capable of traveling over 320 kilometers (200 miles) per hour, with a range of over 161 km with a pilot and four passengers aboard.

"We are recognized as a strategic partner in the global UAM market that requires the highest level of technology and reliability," Hanwha Aerospace CEO Shin Hyun-woo said. "This proves the competitiveness of Hanwha Aerospace, which has been in charge of supplying actuators for various fighter jets and civil aircraft."

Dozens of domestic companies have joined hands with foreign companies such as Joby Aviation, Volocopter and Skyports to provide UAM services in South Korea. Hanwha Aerospace involved in the development of a battery-based electric propulsion system that acts as an eVTOL engine would cooperate in developing a hybrid system that combines gas turbines or hydrogen fuel cells with electric batteries.