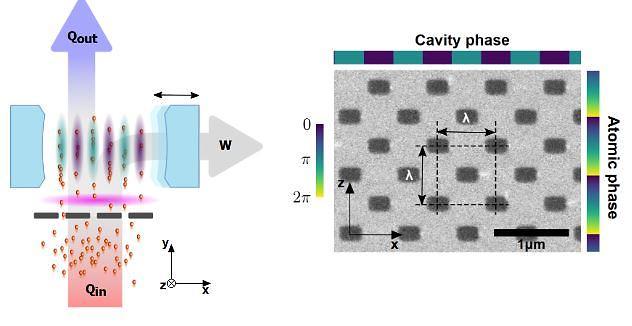 
SEOUL -- In quantum optics, superradiance is a phenomenon that occurs when a group of N emitters, such as excited atoms, interact with a common light field. The performance of nano and microscale heat engines can be improved with the help of quantum-mechanical phenomena.

Heat reservoirs with quantum coherence have been proposed to enhance engine performance, but no physical realizations have been achieved so far. South Korean researchers have implemented a photonic quantum engine driven by superradiance for the first time in the world, according to the Ministry of Science and ICT.

"This is the first experimental implementation of a light-powered superradiance quantum engine," An Kyung-won, a professor of physics and astronomy at Seoul National University, said in a statement released by the ministry on July 22.

"It is significant that it has contributed to atomic physics and quantum information processing through the development of technologies that control superradiance by precisely controlling the quantum superposition of atoms, as well as providing a way to dramatically increase engine efficiency," An said.

The quantum heat engine can work with non-linearly increasing power and high efficiency beyond thermodynamic laws, but its power is still low, so it is necessary to use stronger light for practical use, the ministry said.

The study opened a pathway to the development of photomechanical devices that run on quantum coherence embedded in heat baths, An's research team said in a paper published on the website of Nature Photonics, a peer-reviewed scientific journal.

"We report the first proof-of-principle experimental demonstration of a photonic quantum engine driven by superradiance employing a single heat reservoir composed of atoms and photonic vacuum," the team said.

Reservoir atoms prepared in a quantum coherent superposition state underwent superradiance as they traversed the cavity, leading to about a 40-fold increase in the effective engine temperature and resulting in near-unity engine efficiency. "Moreover, the observed engine output power grew quadratically with respect to the atomic injection rate," An's team said.

"Our work can be utilized in quantum-mechanical heat transfer as well as in boosting engine powers, opening a pathway to the development of photomechanical devices that run on quantum coherence embedded in heat baths."