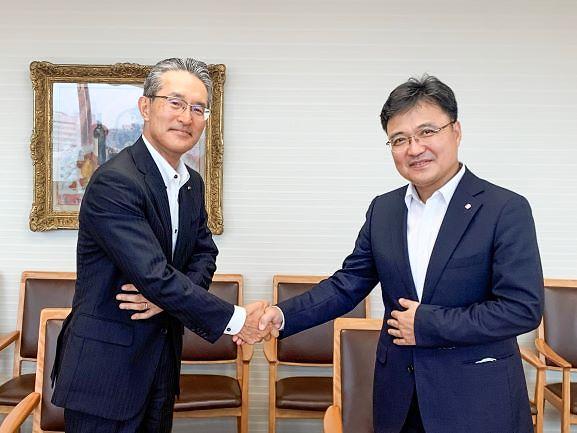 SEOUL -- Lotte Chemical, a major chemical company in South Korea, forged a comprehensive business agreement with Itochu Corporation, a trading company in Japan, to secure stability in the supply of hydrogen and ammonia in East Asia. Ammonia is considered an important part of a sustainable hydrogen ecosystem.

Under a memorandum of understanding, the two companies agreed to cooperate in ammonia trading, the utilization of ammonia infrastructure, the development of hydrogen and ammonia markets in South Korea and Japan, joint investments in green ammonia production facilities, and the establishment of a cooperation model in hydrogen.

Lotte Chemical aims to invest six trillion won in the production of 1.2 million tons of green hydrogen by 2030, including 600,000 tons for power generation, 450,000 tons for fuel cells and hydrogen gas turbines, and 150,000 tons for transportation. Some 600,000 tons of hydrogen will be converted into ammonia abroad for use in South Korea.

Ammonia has been proposed as a potential zero carbon marine fuel due to its stability in supply and relatively easy storage and transportation. Ammonia is produced through a chemical reaction between hydrogen and nitrogen. Green ammonia can be produced through electrolysis powered by renewable energy.