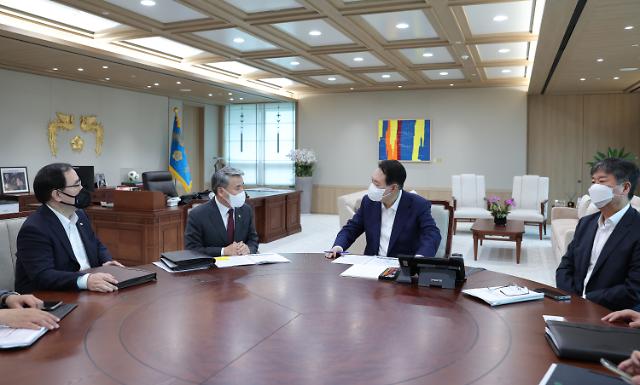 An initial military roadmap presented by the Defense Acquisition Program Administration (DAPA), an arms procurement agency, called for the development of a low altitude missile defense (LAMD) system by 2029. LAMD is the Korean version of Iron Dome, a dome-shaped air defense network that Israel has developed to intercept and destroy short-range rockets and artillery shells.

In a report to President Yoon Suk-yeol on July 22, Defense Minister Lee Jong-sup came up with a renewed timetable to complete the operational deployment of a LAMD system earlier than schedule, Lee's office said in a statement. Yoon has made an election pledge to put LAMD into filed operation in 2026.

The LAMD project is aimed at installing guided missile launchers at various locations to protect important national and military facilities from the threat of North Korea's long-range artillery deployed along the heavily armed inter-Korean border.

In February 2022, the office of former President Moon Jae-in who ended his five-year term in May vaunted a "successful" test launch to verify the flight performance of LAMD and South Korea's L-SAM system that will constitute a multi-layer missile defense network.

The LAMD system is aimed at defending against North Korea's long-range artillery shells flying below an altitude of 10 kilometers (6.2 miles) by using better radars and equipment than Israel's. Israel's Iron Dome has three central components: a radar system, a control center and interceptor missile launchers deployed in a scattered pattern. Each launcher, containing 20 interceptors, is independently deployed and operated remotely via a secure wireless connection.

There was no dramatic change in South Korea's defense buildup program under the new conservative government, but Lee promised to establish a multi-tier missile defense system early on, increase the number of high-powered ultra-precision missiles and strengthen the penetration and strike capability of special forces for powerful retaliatory strikes.

South Korea has strived to develop an independent three-tier aerial and missile defense system, based mainly on technology it has acquired through a joint project involving South Korean and Russian defense firms. The L-SAM, based on the Russian S-400 technology, is an upper-tier interceptor to offer capabilities similar to that of the Terminal High Altitude Area Defense (THAAD) system, an advanced missile shield deployed by American troops in South Korea.

Because U.S companies are reluctant to transfer technology, South Korean developers have forged strategic partnerships with Russian firms. The L-SAM system consists of a ballistic missile interceptor and an aircraft interceptor, along with control stations, radars and launchers.

The Cheolmae-2 (Cheongung) middle-tier missile defense system can intercept targets at an altitude of up to 40 km. Cheongung with hit-to-kill technology was developed with technical support from Russia's Almaz Antey to replace U.S.-made Hawk batteries. A complete battery consists of up to six transporter erector launchers (TELs), an X-band 3D radar, and a fire command vehicle. A low-tier missile defense system intercepts missiles at altitudes of around 20 kilometers.

In September 2021, the South's defense ministry disclosed plans to develop a strong ballistic missile with significantly increased destructive power, sparking speculation the new weapon would be an enhanced successor to the Hyunmoo-4 missile with a maximum range of 800 km and a warhead weight of two tons.

There have been unconfirmed reports that South Korea has pushed for the development of ballistic missiles with a warhead weight of up to three tons capable of destroying underground command facilities and missile silos, ever since the Hyunmoo-4 missile was successfully test-fired in 2020.

Theoretically, if the Hyunmoo-4's range is reduced to 300 to 500 km, the weight of its warhead will increase dramatically. Pyongyang's push for the development of nuclear weapons prompted Seoul to extend the range of ballistic missiles with improved precision. In 2021, Washington endorsed Seoul's free development of missiles without nuclear warheads.