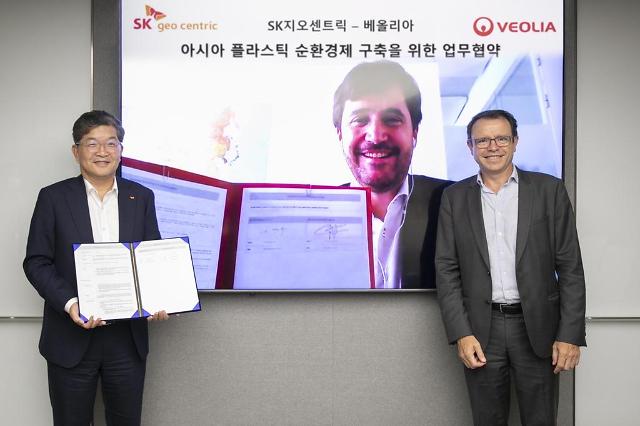 SK Geo Centric (SKGC) has signed a strategic cooperation agreement with Veolia for a joint study on polyethylene terephthalate (PET), waste plastic used as raw materials for pyrolysis, and polypropylene, which is a thermoplastic polymer used in a wide variety of applications due to its tough and flexible properties and good resistance to fatigue. Pyrolysis is a chemical recycling process that can convert plastics into high-quality oil using extreme heat and pressure.

"We are happy to launch a circular economy business based on the green capabilities of the two companies in the Asian market with high potential," SKGC CEO Na Kyung-soo said in a statement on July 25.

The French company will support the construction of SKGC's recycling cluster in the southeastern port city of Ulsan. In January 2021, SKGC partnered with Brightmark LLC, a San Francisco-based company that provides clean energy generation solutions, to build a pyrolysis plant capable of recycling 200,000 tons of waste plastics annually in Ulsan for commercial operation in 2024.

The accumulation of plastic waste has become a serious global problem. Chemical recycling breaks down and returns plastic to its pure, raw material form. United Nations data showed that the amount of plastic waste in the Asia-Pacific regions is projected to reach 140 million tons by 2030.

Advanced recycling significantly improves environmental problems by recycling plastic waste that had previously been merely incinerated or landfilled. New technologies overcome the limitations of physical recycling, which cannot recycle plastic waste if it is mixed with contaminated or colored plastic.