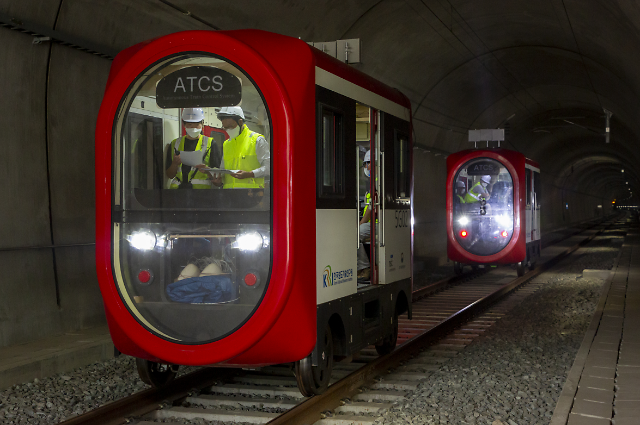 SEOUL -- South Korea's state-run railway research body has developed a train-to-train communication technology, opening the way for the commercialization of an autonomous driving system that allows trains to judge operation conditions by themselves.

A train autonomous driving system is an intelligent train control technology that directly communicates between trains to recognize the operation situation in real-time for safety. The Korea Railroad Research Institute (KRRI) claimed to have conducted the world's first train-to-train (T2T) communication test in various railway environments by installing directional antennas and omnidirectional antennas.

For T2T communication, the institute utilized vehicle-to-everything (V2X), a key autonomous driving technology that allows self-driving cars to communicate with other cars and on-road facilities such as traffic lights and pedestrian crossings.

"The commercialization of an autonomous driving system, which allows trains to drive by judging operation conditions by themselves, is one step closer," Jeong Rak-gyo, head of KRRI's smart electric signal division, said in a statement on July 26. "We will continue to conduct communication tests in various environments and scenarios to improve the technical completeness of the train autonomous driving system."

The research body said it has succeeded in transmitting and receiving data necessary by driving two reduced test vehicles at intervals of more than four kilometers on a test track in Osong, about 106 kilometers (66 miles) south of Seoul.