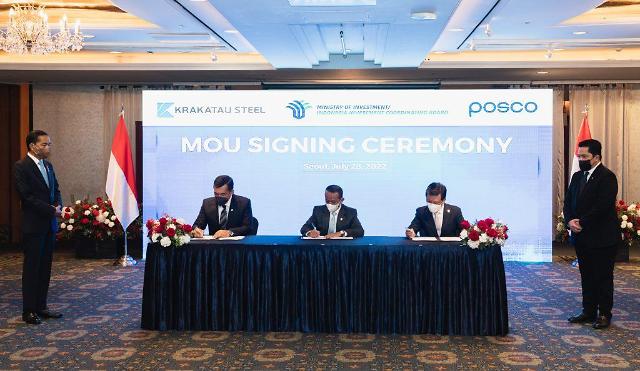 SEOUL -- South Korea's steel group POSCO and its Indonesian partner, PT Krakatau Steel, will double the annual production capacity of their joint venture steel plant in the Southeast Asian country to six million tons with a joint injection of $3.5 billion for five years. They will also cooperate and participate in the construction of Indonesia's new capital.

A memorandum of understanding was signed by POSCO and the Indonesian state-run company on July 28 in Seoul in a ceremony attended by  Indonesian President Joko Widodo who is on a state visit to South Korea.

POSCO owns 70 percent of the joint venture capable of producing three million tons of steel every year and the rest controlled by PT Krakatau Steel. It was the first steel mill built by POSCO abroad. The two companies agreed to establish a second crude steel furnace and a cold rolling plant as well as facilities for producing automobile steel sheets.

Minister Bahril: "This expansion of investment will greatly contribute to the growth of Indonesia's steel industry in the future. We will provide full support to ensure that the project goes smoothly," Indonesia's Investment Minister Bahlil Lahadalia said in a statement.